Start a Wiki
Ilsa (Dyanne Thorne 1943-2020) is the villainess in the 1976 sexploitation sequal "Ilsa, Harem Keeper of the Oil Sheiks".  It is considered the second in a line of four Ilsa films.

Ilsa somehow is alive and reincarnated from the previous film "Isla: She Wolf of the SS", where she was a Nazi prison camp kommandant to the 1970's.  This time around she is the head of a white slave ring where her primary duty is to train innocent young girls for service in the harem of El Sharif (Jerry Delony).

When she is not instructing recruits on proper technique, she adds to her stable of eunuchs with the help of her lesbian henchwomen, Satin (Tanya Boyd) and Velvet (Marilyn Joi).

Ilsa is soon tamed by Adam Scott (Max Thayer), an American diplomat who has infiltrated the harem to overthrow the sheik's corrupt government.  Ilsa falls under his spell eventhough she knows he is a spy.

The torture in the film is tamed down a little from the first Ilsa movie, but there is still a number notable examples.  There are ants that eat away feet, beggars flogged and set on fire, teeth hammered out for sexual performance, testicles worn off by hand, and IUD explosives placed in vaginas.  Women are sold, humiliated and tortured.

The sheik learns of Ilsa's affair and sentences her to public humiliation by having her tied to a stake while she is orally violated by the town vagrant.

Ilsa ends up helping Scott escape and take down the sheik, mainly because he has turned on her.  The slaves revolt culminating in a violent confrontation against El Sharif and his soldiers.  Sharif is chained and gagged, and Ilsa has him perform sex with the slave Katsina (Su Ling).  Katsina was the one with the bomb in her vagina, and upon deep penetration the bomb is activated.

Prince Salim (Bobby Woods) is not happy with Ilsa for allowing the innocent Katsina to die.  He sentences Ilsa to a slow starvation and curses Ilsa in her cell. 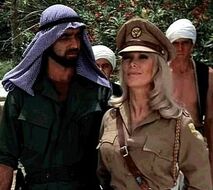 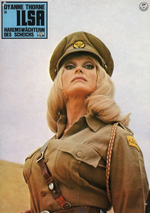 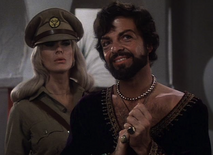 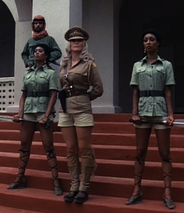 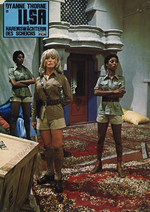 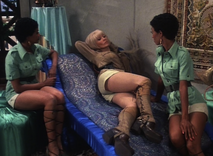 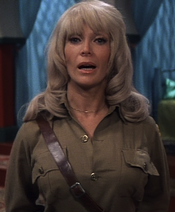 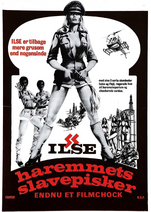 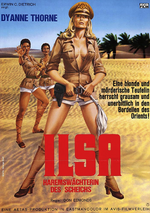 Add a photo to this gallery
Retrieved from "https://femalevillains.fandom.com/wiki/User_blog:Doalfe/Ilsa_(Ilsa,_Harem_Keeper_of_the_Oil_Sheiks)?oldid=194625"
Community content is available under CC-BY-SA unless otherwise noted.