This barbaric lady pirate leads a group of cutthroat aliens, monsters and mutants in her evil conquests throughout the universe.  She has a base that is in the form of a gigantic fish-shaped submarine known as the Subcraft.   She was implied to be the biological twin sister of Dimitria (Carol Hoyt), a good being whom Zordon asked to mentor his Rangers on Earth.  She was the adoptive daughter of the infamous sea hag, Mama D, the aunt of Elgar, and sister of General Havoc.  Her adoptive father, a space pirate was thrown in the Vortex of Eternal Doom and Sorrow by her mother.  Havoc was a cyborg and had another sibling who happened to be the parent of Elgar.

Divatox was capable of firing blasts of energy from her eyes with various effects, including projections, materialization, and transformation.  She also had a lizard-like extended tongue.  Divatox possessed the ability to teleport as well.

Divatox journeyed to the planet Liara to capture the wizard Lerigot.  She planned to take him to the ancient lost island of Muranthias on Earth, where she would resurrect and marry the demon Maligore with the intention of using his power to steal all the riches in the universe.  Divatox captured former Power Rangers Jason and Kimberly to serve as sacrifices for Maligore.  Divatox coerced the Rangers into surrendering Lerigot in order to save Jason and Kimberly.  However, Divatox double-crossed them and managed to capture Lerigot, using his magic to allow her submarine safe passage through the Nemesis Triangle.  Along the way, she discovered the Turbo Rangers were on her trail and tried to destroy them.  She called Rita Repulsa for advice on how to destroy the Rangers, but Rita could merely laugh and recommend that Divatox run away.  Once on Muranthias, Divatox attempted to awaken Maligore, but the Turbo Rangers crashed the ceremony.  They freed Lerigot and his family, who were able to release Jason and Kimberly from their evil brainwashing.  The Rangers then destroyed Maligore with the Turbo Megazord.  Divatox was furious and swore revenge against the Rangers.

Divatox rallied her forces and traveled to Earth in hopes of destroying the Rangers and conquering their planet. Along the way, Divatox managed to uncover the Rangers' secret identities. She tried and failed to sabotage the Rangers' graduation ceremony. Divataox tried to trap Zordon and Alpha 5 in a wormhole and would send many of her own monsters to defeat the Rangers with no success.

Some time later, the Blue Senturion had arrived from the future with a message for Dimitria of Inquiris, who had taken Zordon's post as mentor to the Power Rangers.  Taking advantage of her close resemblance, Divatox posed as Dimitria in order to receive the message. It revealed that she would combine forces with Rita Repulsa, Lord Zedd and the Machine Empire and together they would conquer the universe. Divatox, however, viewed this as a threat, not wanting to share the universe's riches with the other forces of evil. She also learned that a team of heroes would eventually pose a threat to the alliance. Divatox swore to prevent the prophecy from coming to pass.

On one occasion, Divatox nearly succeeded in destroying the Rangers and Angel Grove, but Earth's heroes were aided by four teenagers who eventually took the places of veteran rangers Tommy, Katherine, Tanya and Adam, who decided to move on with their lives.  The new Turbo Rangers proved to be just as big a nuisance to Divatox as the previous team, as was the Phantom Ranger.

Divatox enlisted the help of her mother, Mama D, and brother General Havoc in her battle against the Turbo Rangers, but still her plans failed.  She was able to capture the Turbo Megazord and obtain the Phantom Ranger's Power Ruby, combining the two to do battle with the Rangers' Rescue Megazord; this, too, ended in failure.

Eventually Divatox sent the all-powerful titan Goldgoyle to destroy the Power Rangers. Goldgoyle destroyed both the Turbo and Rescue Megazords, but was also destroyed in the process.  Meanwhile, her minions Elgar and Rygog stumbled upon the location of the Power Chamber and reported it to Divatox, who sent her entire army to destroy it.  The Power Chamber was destroyed, but not before Dimitria and Blue Senturion left to help repel an attack on Zordon's homeworld of Eltar.  Divatox ordered her army to search the rubble to ensure the Rangers had been destroyed, but was called away to to the Cimmerian Planet by Dark Specter, the Monarch of Evil.

Divatox joined the United Alliance of Evil which sought to conquer the universe. Divatox and Rita initially lobbied for the job of going after the Space Rangers, but were turned down by Dark Specter in favor of Astronerna. Divatox was tasked with hiding Zordon on other planets while his powers were being drained. Divatox took him to the planet Hercuron but fled when spotted by the Phantom Ranger.

Storm Blaster, one of two sentient vehicles captured by Divatox during her final battle with the Turbo Rangers, managed to escape. She asked Astronema if she'd seen it, but ultimately Divatox lost both the Storm Blaster and the Lightning Cruiser to the Rangers.

During Dark Specter's final invasion, Divatox was sent to attack Gratha, a planet protected by the Aquitian Rangers. She was outraged when Astronema took over as Queen of all Evil after Dark Specter's demise.

When the Red Space Ranger shattered Zordon's energy tube, the resulting wave destroyed the majority of the universe's evil forces, but "purified" others instead.  Divatox was among those purified, along with Rita Repulsa and Lord Zedd. 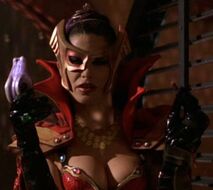 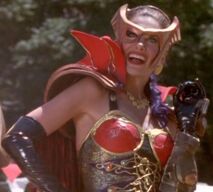 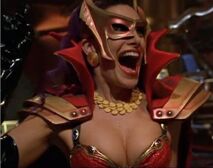 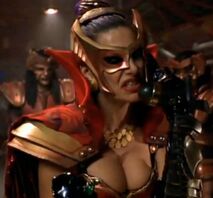 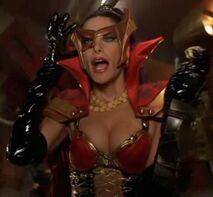 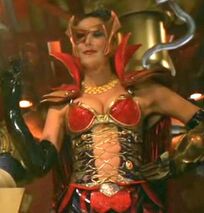 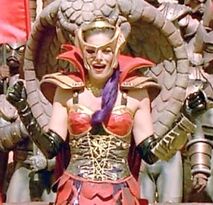 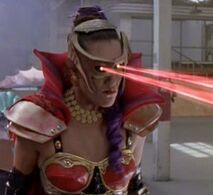 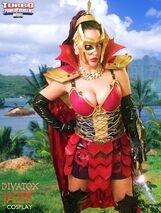 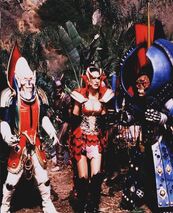 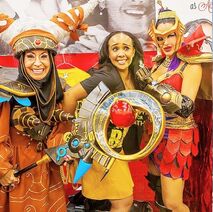 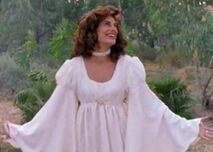 Add a photo to this gallery
Retrieved from "https://femalevillains.fandom.com/wiki/User_blog:Doalfe/Divatox_(Power_Rangers_Turbo)?oldid=68687"
Community content is available under CC-BY-SA unless otherwise noted.