Start a Wiki
Cousin Pretensia (Morgan Fairchild) is an antagonist in the 1999 episode "Thing's Romance" for the TV series "The New Addams Family".

Cousin Pretensia is a countess who mooches off her family members and steals small items from them.  She is said to "give professional cheapskates a bad name".

The Addams family thought she had lost all her money when her husband, Lord Wick ran through it all before he was mauled to death by a pack of hyenas.  In fact, she had made plenty of money by being a freeloader.

The Addamses take Pretensia in to their home out of obligation, though none of them enjoy her staying with them.  Thing, however, is quickly enamored with her handmaiden, Lady Fingers.

The Addamses dislike her emensley, as she constantly name dropped all the famous people and places she had been to.  Gomez, Uncle Fester, and Grandmama did whatever they could to try to kill her off.  In one instance, they convince Pretensia to take a seat in their electric chair, and then proceed to turn it on.  As Pretensia is being electrocuted, Grandmama is about to use an axe on her to finish the job.  However, Morticia and Gomez come to their senses, and stop the torture.

Later, Lady Fingers has had enough of Pretensia's ordering her around, and throws food on her.  After Pretensia storms out of the family's house, taking her handmaiden with her, Thing is devestated.  They are forced to ask Pretensia to come back because Thing misses Lady Fingers.

However, as Lady Fingers had been too sad to work, Pretensia had her replaced with an elderly handmaiden, Mrs. Scratch.  While staying with the Addamses for the second time, Pretensia accused them of stealing her jewels.  She believed the culprit to be Thing.  However, Morticia finds that the thief was really Mrs. Scratch.  Among the stolen goods, Uncle Fester finds her bank statement, showing that Pretensia was worth $150,000,000.  Despite this she remains a freeloader because that is how she got so rich in the first place.

The addamses convince Pretensia to hire back Lady Fingers, and the two set sail around the world, as her relatives won't take her in anymore.  However, on the way out of the mansion, she is once again blown up.  Apparently, she had stolen a bath robe that contained Fester's mega bomb which he had left in the linen closet.  Pretensia re-entered the house covered with soot and smoke everywhere, and told them she had a thing for terry cloth.

At the end of the episode, they hear from Pretensia through a postcard, that she has married Earl Windsor, before realizing Earl was not a title, just a name. 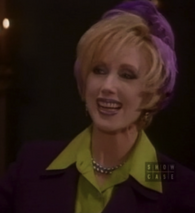 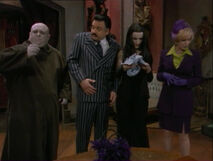 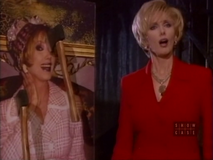 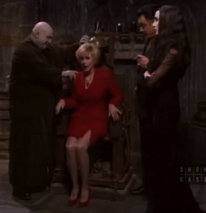 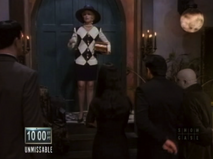 Add a photo to this gallery
Retrieved from "https://femalevillains.fandom.com/wiki/User_blog:Doalfe/Cousin_Pretensia_(The_New_Addams_Family)?oldid=170900"
Community content is available under CC-BY-SA unless otherwise noted.