Start a Wiki
Comtesse du Barry (Asia Argento) was a minor antagonist in the 2006 historical drama "Marie Antoinette".  Historically, she is known as Jeanne Becue, Comtesse du Barry (1743-1793), but was generally referred to as Madame du Barry.  She was the Maltresse-en-titre, or chief mistress of Louis XV of France.

In the film, she is first introduced to Marie Antoinette (Kirsten Dunst) at a family supper, a day before Marie's wedding to the Dauphin.  du Barry had been the official misstress a little over a year at that point, but it was surprising that she was included at the meal.  Marie noticed Madame du Barry, who stood out with her extravagant dress, and overly loud voice.  Marie was informed of the relationship to Louis, and that she would be her rival.  The innocent Marie also learned that the true nature of her business, was to provide pleasure for the future king.  As a result, Marie took an instant dislike to the Comtesse.

Comtesse du Barry was married to Comte Guillaume du Barry, an aristocrat and owner of a casino.  Du Barry helped establish Jeanne's careeer as a courtesan in the highest circles of Parisian society.  This eventually led to her becoming the king's mistress.

Marie refused to speak to Madame du Barry, because she disaproved of her background.  However, she eventually did speak to her at the New Year's Day ball in 1772, when she said "There are many people at Versailles today", which gave her the option to take or leave.

There were several scenes in which they showed Comtesse and the King enjoying one anothers company.  In addition, she had quite a bit of political influence on the King, which Marie did not appreciate.

When King Louis XV (Rip Torn) became sick with smallpox, and suggested to Madame du Barry to take leave of Versailles.  This was done to protect her from infection and to prepare for confession and last rites.  Therefore, she was relieved of her duties.  The film showed Madame du Barry leaving the palace, and Marie Antoinette enjoying this departure.  This is the last we see of Madame du Barry.  However, historically we know that after Marie's son was ascended to the throne, Marie had her husband exile Jeanne to the Abbey du Pont-aux-Dames near Meaux-en-Brie.  She was at first not warmly accepted by the nuns, but soon enough grew accustomed to her.

During the French Revolution, Du Barry was charged with suspicion of financially assisting those fleeing the French Revolution.  She was arrested, and the accused of treason and condemned to her death.  She vainly attempted to save herself by revealing the hiding places of the gems she had hidden.  However, this did not save her, and on December 8, 1793, she was beheaded by the guillotine on the Place de la Revolution.  She was buried at the Madeleine Cemetery along with Louis XVI and Marie Antoinette. 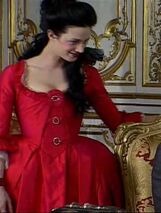 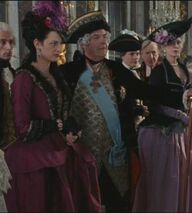 Add a photo to this gallery
Retrieved from "https://femalevillains.fandom.com/wiki/User_blog:Doalfe/Comtesse_du_Barry_(Marie_Antoinette)?oldid=166421"
Community content is available under CC-BY-SA unless otherwise noted.