Start a Wiki
Cecilia Banks (Arielle Kebbel) is the main antagonist in the 2006 film Aquamarine.

Cecilia is a spoiled, self-centered, snobby rich girl, and she will stop at nothing to get what she wants. She is the daughter of local weatherman Storm Banks. Cecilia is the rival of Claire Brown and Hailey Rodgers, and later Aquamarine for Raymond's affections.

Cecilia first meets Aquamarine, when Claire claims Aquamarine to be her cousin. Cecilia makes fun of her. In retaliation, Aquamarine tells her that her Cecilia's name means "dim-sided" and then her car blows a gasket.

At the fair, she tells Ray that Aquamarine already has a boyfriend.  As a result, Ray asks Cecilia to "The Last Splash", a party held at the local beach club to celebrate the end of summer. The next day, Claire shows up at Cecilia's home and exposes her lie. To cover up the lie, Cecilia tells a friend of hers to throw Claire into the pool, but Raymond makes him put her down. After Claire leaves crying, Raymond is disgusted by Cecilia's actions and teasing, and dumps her.

At "The Last Splash", Cecilia attempts to confront Aqua and Ray, but Hailey and Claire tell her to leave them alone. Later that night, Cecilia and her friends follow them to the water tower in her car. Although her friends want to return to the party, Cecilia climbs up the water tower, and learns the truth: Aquamarine is a mermaid. Cecilia then closes the door and after she sees her friends took her car and left her, she steals and knocks down the ladder.  When Cecilia returns to the beach club, she tells her friends that Aquamarine is a mermaid, but they think she has gone crazy and laugh at her and walk away.

The following morning, Cecilia attempts to expose Aquamarine on TV, by telling her father. She tells him that she believes a little girl is trapped in the water tower. However, Aquamarine had been saved earlier by a strange kind-hearted beach club caretaker. The firefighters find only a blowup dolphin in the water tower. After Cecilia humiliates both herself and her father on TV, he severly punishes her by cutting off her driving privileges and takes away her car keys and tells her that when she walks to school every day, she can think about why she needs so much attention.

Later, while on the dock, when Aquamarine and Raymond are talking, Cecilia pushes her into the water, which exposes her as a mermaid to Raymond. Aquamarine's father then attempts to pull her home with the tides. After Ray leaves to help Aqua, Cecilia realizes that he still chooses Aquamarine over her, much to her fury.

In a deleted scene, Cecilia, still angry that Raymond chose Aquamarine over her, kicks a bucket full of fish. However, she slips on water and lands into the fish, much to her horror and disgust. She then whines about how she wants her car back. 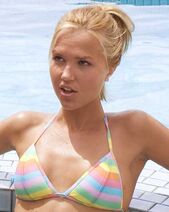 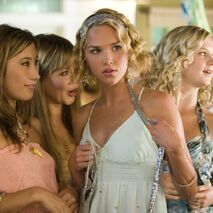 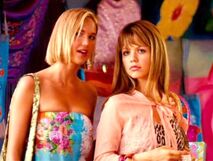 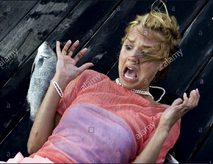 Add a photo to this gallery
Retrieved from "https://femalevillains.fandom.com/wiki/User_blog:Doalfe/Cecilia_Banks_(Aquamarine)?oldid=170902"
Community content is available under CC-BY-SA unless otherwise noted.