Start a Wiki
Candy Chance (Francesca Eastwood) is a minor villainess in the 2015 comedy horror film "Kids vs Monsters".

In the film, a group of rich parents are fed up with their entitled and spoiled offspring.  They decide to take their kids to a mysterious mansion, where they will be killed off by a group of monsters in training.  It is meant to be a satire poking fun at teens today.

Candy is introduced as a pageant winner who is currently holding 376 titles.  She is dressed in a long pink dress, wears a crown, and has a sashes drapped across her chest that she changes throught the film to correspond to her mood and situation.  Her father Charles, is a famous plastic surgeon who she has already set up a plan with to give her the perfect barbie body when she turns 18.  She tells the interviewer that she is a winner, and sinning is what she does.

The six kids besides Candy include the obnoxious fatty, Bobby (Jesse Camacho), the depressed goth girl, Molly (Sidney Endicott), the do-good kid, David (Bridger Zadina), the social media girl, Daisy (Anna Akana), and the pugilist, Oliver (Daniel David Stewart).  Each of them has disappointed their parents so much, that their parents go to Boss Monster (Malcolm McDowell) to complain and sign a contract with a strong death clause.  Boss Monster is in charge of all the other monsters, and leads the parents into a throne room where they are privy to a close capture video screen of the action inside the house.

The seven monsters are released one by one, and introduced by Boss Monster and his assistant, Heinrich (Lance Henriksen), who gives a cartoon backstory to give their background.

The six kids are dropped off at the mansion, and of course Candy has the driver drop off an armload of her suitcases.  The mansion has a sign on the front porch which refers to it as a reform school, despite the fact that they were all told that they were going there for different reasons.  Candy was told that she would be competing in another beauty pageant for the top 1%.  They are greeted at the door by the Butler (Richard Moll).

Candy immediately develops a rivalry with Daisy, the hipster, when the two of them bump into each other in the dark.  Candy's lipstick is smudged and she makes fun of Daisy.  Daisy insults her back, asking if she is supposed to be a prom clown.  She snaps a photo of Candy and tells her followers are going to die when they see it with the caption #BimboBarbie.  When she shows her picture, she has the phone ripped out of her hands by Candy, and thrown on the ground and stomped on by her high heels.  Without missing a beat, Daisy whips out a replacement phone. While waiting at the dinner table, Daisy is playing video games on her computer.  When she leaves the table, Candy takes the opportunity to delete her game profile.  When Daisy returns, the two get into a little catfight, that is interrupted by the Butler.  Irronically, Candy now has "Miss Catfight" as her sash. The first monster is introduced as an alien bug with razor sharp teeth.  One bite will inject its victim with eggs, that when released with eat their host from the inside.  The bug crawled under the dinning room table, and was about to bite Candy.  However, Candy thought it was Bobby playing footsy with her.  She turned to slap him and call him a creep, and her steak knife fell off the table, impaling the bug.  Bobby reached over, picked up the large bug that resembled a lobster and proceeded to eat it.  The green guts splattered over Candy's perfect face.

When the food is served, Candy makes the comment that she has never seen so many calories all in one place.  She then asks the rest of the group while they are eating, how they can put that stuff in their body.  Daisy responds, "says the silicone princess".

After dinner, they are told to go get ready for a surprise.  Candy asks if it is a pony, and if it is, she isn't interested, since her daddy has already bought her one in every color.

Candy is seen in her bedroom choosing between which sash to wear next, and settles on "Miss Surprise".

A walking robot turns off the power, and the group of kids meet downstairs in the living room.  There they are introduced to Robbie the Robot, who began his life as a coffee machine.  However, the machine was zapped during an electrical storm, and came to life as a demonic robot.  When the power came back on, Daisy discovers the robot and turns it on.  The robot dispenses a latte which Daisy begins to drink, despite warnings from Candy about the high fat content.  After pretending to be choking on the drink to scare the other kids, Daisy laughs it off.  However, the robot soon comes alive with Daisy oblivious to it.  The rest of the kids move away in horror as the arm of Robbie comes alive.  Daisy thinks it is cool and pulls out her phone to take a picture.  Robbie the Robot begins to say "Hipsters must die", and then zaps Daisy.  Her body disintegrates and her clothes form a pile on the ground.  Daisy jumps for joy as her nemise is now deceased.  Molly the goth girl unplugged the Robot disabling it.

With the death of the first kid, they begin to sense that something isn't quite right.  The Butler turns into a wolfman, when he sees the mess that the kids made from beating the robot.

While running from the Butler, they are introduced to Monsieur Babette (Phillipe Simon), who was a giant Big Foot or Yeti.  Babette's story was that he had a normal life until stumbling upon a stash of candy in the woods left by some campers.  The candy turned into an obsession for him, and he became possessed to find more to satisfy his addiction.  He became a lumberjack but his wife told him to leave their home in French Canada.

Babette chased the kids upstairs into a bedroom.  Despite having an axe, he only knocked on the door.  Inside, the group discovered a house cat, that turned into it's human form.  The cat named Daisy (Anna Akana), breaks it to the kids that they were sent here to be disposed of.  However, they are convinced that their parents wouldn't do anything to put them in harms way.  Daisy begins to tell each of them the harsh truth of why their parents are disgusted by them.  After Candy tells her that her father thinks the world of her, the cat responds, "Do you have any idea know how many judges daddy dearest has to bribe just to shut you up?  Oh sure, maybe he's proud of his little barbie doll, but he's prouder of his money".  As Candy begins to cry, she is mocked by Daisy, who says "the truth hurts".  She goes on to tell them that each of their parents find them to be nothing more than a drain on their finances.  We learn that Daisy is a union between a visiting siamese cat from Japan and a common tom cat, that produced a demon cat named Daisy.

Daisy chased the kids out the door and back downstairs, where they are introduced to a vampire like monster with green tentacles protruding from her face.  She was once a popular beautiful lounge singer named Rebecca (Alexandra Hulme), who turned to witchcraft to spice up her repertoire.  While singing one night the tentacles appeared on her face, which were the result of a spell she unwittingly performed.

Rebecca begins to chant a spell on the kids, which sends them running out of the room.  That is all except Candy, who stays behind, drawn to the lovely necklace around Rebecca's neck.  Candy takes it off Rebecca's neck and begins to tell her that it is the most beautiful thing she has seen.  Rebecca becomes enraged and demands that Candy give it back to her.  However, Candy begins to mock Rebecca, telling her that "an ugly hag like you doesn't deserve such a beautiful piece.  It belongs on my pretty neck.  With this little beauty, I'll win every pageant fair and square."  She is now wearing a sash with "Miss Katonic".

Rebecca swipes at the necklace, and the two struggle playing tug-o-war with it until it snaps and the beads fall to the floor.  The rest of the kids come back into the room, and warn Candy to stay away from the lady with the tentacles.  However, it is too late, Rebecca extends out her hand, and a beam of light shoots out toward Candy.  The last thing we see is the shock of doom across Candy's face, and she is turned into a goose.  The Candy goose goes running around the room, wearing a sash saying "Miss Goose".  The rest of the kids begin screaming and are chased out of the room by Rebecca. Next we see Babette walking into the room with his axe.  He notices Candy the goose on the floor and snatches her up.  He walks with her into the kitchen, and we hear a meat grinder turning on, and then silence.  Candy has been turned to pate.  David and Molly realizing what has just happened, make the comment, "poor candy".  Next we see Babette sitting at the candle lit dinning table spreading the pate on crackers and eating them.  He makes the comment, "Mmmmmm, flaguette, tastes like candy", and then begins laughing.

We next see the parents celebrating in the throne room for another kill.  One of the parents tells Charles congratulations, and he says that he "feels a huge weight being lifted off his chest.  Liposuction for the soul".

In the end, David and Molly are the only kids to survive, and the parents are eliminated by Big Boss. 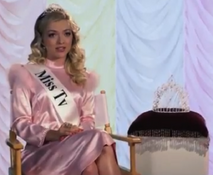 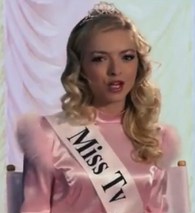 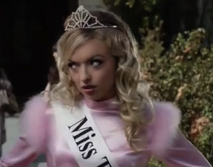 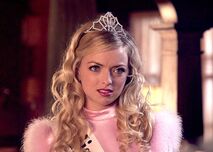 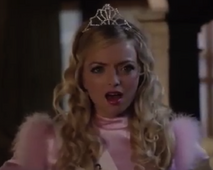 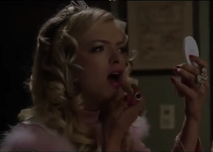 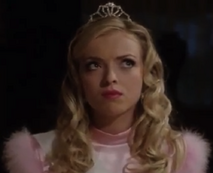 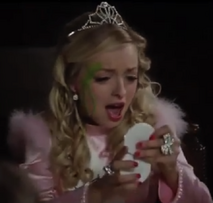 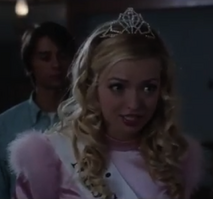 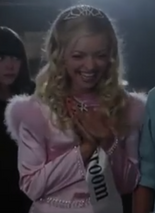 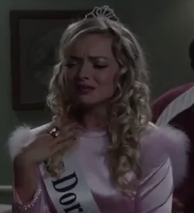 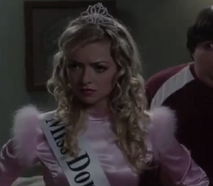 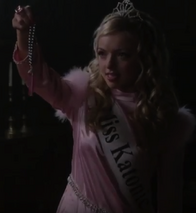 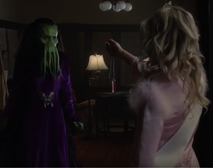 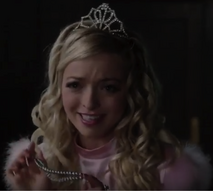 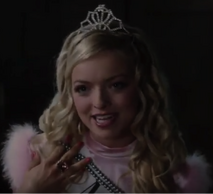 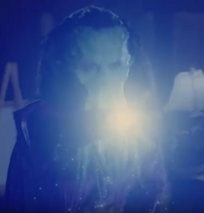 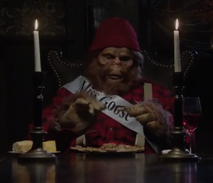 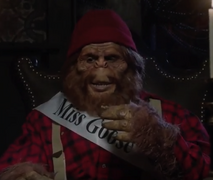 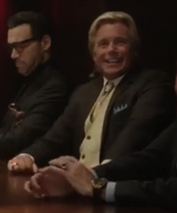 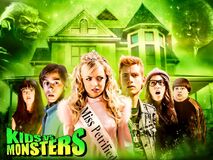 Add a photo to this gallery
Retrieved from "https://femalevillains.fandom.com/wiki/User_blog:Doalfe/Candy_Chance_(Kids_vs_Monsters)?oldid=170916"
Community content is available under CC-BY-SA unless otherwise noted.