Camille Reedbottom (Mari Blanchard) is a minor villainess in the 1963 movie "McLintock!".

Camille is a saloon girl, and possible madame at the local towns establishment. She is acquainted with George Washington McLintock (John Wayne) who goes by the nickname of G.W. G.W. is estranged from his wife, Katherine McLintock (Maureen O'Hara) who left him two years before, suspecting him of adultery. Mainly because she thought he had an affair.

Katherine returns to the town to seek a divorce from G.W., but he declines to sign anything. Things don't get much better with the jealous estranged wife, we she learns that he has taken a pretty widow, Louise Warren (Yvonne De Carlo) as his live-in housekeeper, along with her two children.

One night, G.W. visits the saloon where Camille is working. When he feels that things may be misinterpreted by Katherine, he decides to leave and go play chess with Jake Bimbaum (Jack Kruschen). Intrigued by G.W., Camille follows him back to the house, claiming she wants to learn how to play chess. Camille intently watches the game, but is more interested in G.W. When Katherine shows up, G.W. warns "Camille, you're on your own", meaning Katherine is the jealous type and things may get a little sticky. Katherine inspected Camille walking around her as Camille introduced herself and saying that she was learning chess, and thought it would help pass the time. She continued, "See, I have nothing to do all day long". Katherine didn't say a thing, but backed Camille all the way out of the house without saying a word or making any contact with her.

At the end of the film, there is a Fourth of July celebration in town, and G.W. and Katherine are having a knockdown drag-em out fight, in which Katherine keeps losing all of her clothes stitch by stitch. At one point she is climbing a ladder wearing nothing but a green corset and bloomers, when the ladder detaches from the building, and she falls flat into a horses water trough.

Camille happens to be right near the trough when she does this, and begins smugly laughing hysterically at Katherine's expense, while she is getting out. She responds, "Oh, Mrs. McLintock, you're all wet". Katherine grabs Camille's hand and flings her into the water trough where she is completely submerged kicking her legs up in the air as she attempts to come up for air. Camille was wearing a green dress and corset, black seamless fishnet stockings with black high heels, and had a green feather head piece on. However, she now looked like a drowned rat with her freshly curled blonde hair now completely ruined. The town who had gathered watching the spectacle were now laughing hysterically at Camille, as Katherine had turned the table on the now flailing damsel in distress. Katherine yelled over the top of her victim with something to the effect that "now you are too", as in all wet.

Next we see G.W. come up to the trough, and thinking it is Katherine begins to help her out of the water. However, Ben Sage, Sr. (Bruce Cabot) yells "wrong woman G.W.". With this, G.W. took a better look at the dance hall floozy who has nearly regained her composure and is about to get out of the trough. He gently pushes the gorgeous Camille backwards into the water again, and the crowd roars with approval. She is left splashing around in the water as G.W. walks away looking for Katherine.

This is the last we see of the humiliated Camille. That will teach her from messing with Katherine McLintock, or looking at her man. It is likely, that a lady like this would need to move away and get a fresh start in a place that is unaware of this situation. 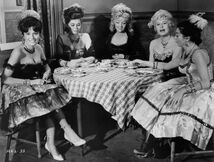 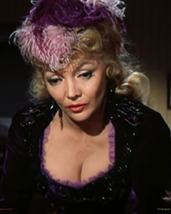 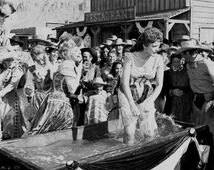 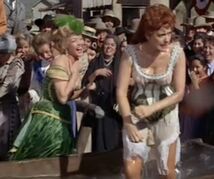 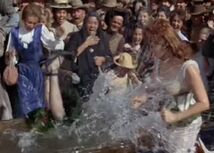 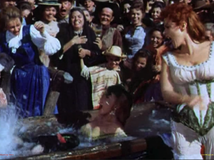 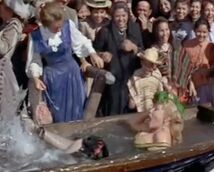 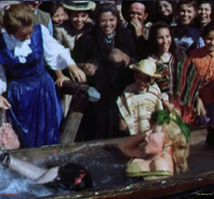 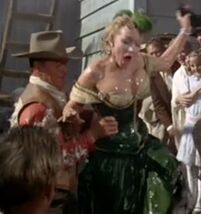 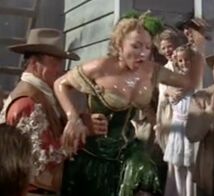 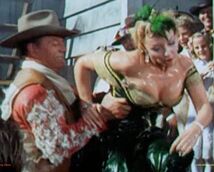 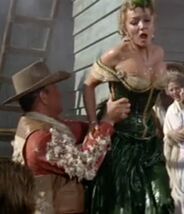 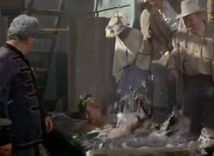 Add a photo to this gallery
Retrieved from "https://femalevillains.fandom.com/wiki/User_blog:Doalfe/Camille_Reedbottom_(McLintock!)?oldid=212912"
Community content is available under CC-BY-SA unless otherwise noted.