Ally is one of the counselors at Camp Rolling Hills, and it is likely that she attended the same camp as a camper. She is the most sexually promiscuous members at camp.

Ally hates Angela Baker (Pamela Springsteen) for her disciplinarian nature and for sending her good friend Phoebe home. However, little does she know that Angela actually killed Phoebe (Heather Binion).

Ally pretends that she is having a stomach cramp and sneaks out into a restroom to have sex with Rob Darrinco (Terry Hobbs). Fortunately for her, she locked the door to the bathroom, as Angela was planning to come in and kill both of them.

Later, she becomes jealous of Molly as she becomes close with Sean Whitmore (Tony Higgins). She finally confronts Molly and criticizes her relationship and tells her to stay away from her, insulting her and telling her to go run and tell Angela. Ally then states that if she's lucky, the "dyke" will send her home as well.

Ally once again has sex with Rob, but this time in the woods. After done, she returns to the girl's cabin where she finds a fake love note from Sean, which is actually written by Angela. The note asks her to meet him at the old cabin near the hills. After Ally arrives, Angela confronts her. While walking away, Angela grabs her and stabs her in the back twice, which causes Ally to drop to the ground. Angela demands that she get up, and then forces her into the small outhouse.

Angela forces her face into the opening of the outhouse hole, and asks her to tell her what she sees in there. Ally responds with "Shit". "That's right, Ally, one of your favorite words. Mind if I borrow it for awhile? You've been a shitty friend and a shitty camper". Angela then asked what else was down there, to which Ally responded "Piss". Angela then responded, "You pissed away your good looks and God given talent your whole life, and turned it into nothing but a cynical dirty mouth waisted flesh". Finally, she asked what else was down there. This time, Ally responded with "I don't know", to which Angela demanded she get down there and find out. Ally was picked up and forced down the small hole head first. Once inside, we see her gurgle in the urine and feces that sound like it is full. Ally pulls herself up by the toilet seat, but Angela uses a large stick to force her back in and under the human waste. When Ally once again pulls herself up, we see her face covered in leeches. Once again, Ally is forced back in by Angela, and it is obvious that she is getting weaker and weaker. Ally comes up for a third time, and is gasping for air. Angela once again forces her back down, and we hear her gasp for air, and then the struggle is over. Angela's last comment before leaving is "You should have been the first to go".

Ally's body was later put in a sleeping bag and relocated to the nearby cabin, with leeches still present on her face. 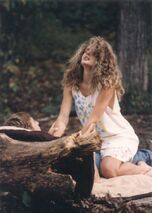 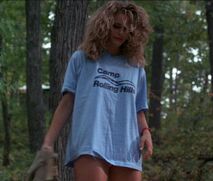 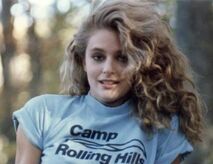 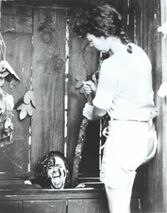 Add a photo to this gallery
Retrieved from "https://femalevillains.fandom.com/wiki/User_blog:Doalfe/Ally_Burgess_(Sleepaway_Camp_II:_Unhappy_Campers)?oldid=200262"
Community content is available under CC-BY-SA unless otherwise noted.