Start a Wiki
The Young Woman, as she is referred to in the credits (Iulia Cirstea), was a villainess in the 2012 film, Werewolf: The Beast Among Us. She was shown in the beginning of the movie running in fear before reaching a house nearby. The house was the home of a couple and their son, Charles (the main protagonist of the movie), and she was knocking at their door panicking over the full moon rising.

While outside, the villainess transforms into a werewolf and kills the couple's horse. She later crashes into the house and kills both of Charles' parents and slowly moves closer to Charles, who unties the chandelier, which falls on the villainess and kills her. The werewolf reverts to her human form before dying, and Charles escapes as the entire house is later engulfed in flames. 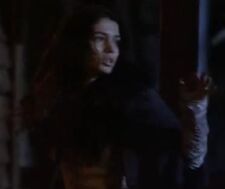 The young woman panicking with the full moon rising

The villainess, now transformed into a werewolf

The evil female werewolf killed by a chandelier

The villainess lying dead in her human form
Add a photo to this gallery
Retrieved from "https://femalevillains.fandom.com/wiki/User_blog:CEDJunior/Young_Woman_(Werewolf:_The_Beast_Among_Us)?oldid=196214"
Community content is available under CC-BY-SA unless otherwise noted.