Start a Wiki
Victoria Garrett (Sarah Aldrich) is the main villainess from the 2019 Lifetime film, Stressed to Death (airdate May 24, 2019).

Victoria Garrett is the wife of David Garrett and the mother of their only child, Alston Garrett. The couple owned a real estate firm and in their first appearance, they were preparing for Alston's birthday, as Victoria showed David their son's birthday cake. She later sent David to the Kwik Mart to buy milk and other supplies she would need to make Alston's favorite pancakes.

That night, however, a gunman entered the store and held David and an unnamed pregnant woman hostage, and it was that night that Maggie Hart (an EMT and the film's main protagonist) was on the call and entered the store in an attempt to save the hostages. However, the gunman ordered Maggie to choose only one to save, and under David's own insistence, Maggie got the pregnant woman to safety, while the gunman shot David. Maggie's attempts to save David were unsuccessful, as he succumbed to the shooting.

10 years later, Jason Hart (Maggie's husband) was shown having been hired by Victoria, who urged him to accept a lucrative deal on a lease, while asking about how Maggie and their daughter. However, when Victoria returned home, she turned on her TV and played video of her husband's death, while sprinkling his ashes on her plant--which was a gift from David. As the scene revealed, Victoria turned heel following her husband's death, as she blamed Maggie for what occurred and plotted a murderous revenge on her and her family, as she revealed that she hired Jason as part of her sinister plan. Afterwards, Victoria met a pair of criminals, Nelson and Wade, and paid them to take the Harts to the now-abandoned Kwik Mart, where they would kill Jane and Jason and force Maggie to watch--doing so to make Maggie feel the pain of losing her loved ones.

However, when the pair went to the Garrett house to place a camera on the television (so Victoria could watch the murders), they spotted Jane in the house and abducted her, while shooting Jason (non-fatally) in the process. Victoria expressed indignation at the pair for changing their plan, and she ended up tending to Jason by placing him in her bed. Afterwards, the evil Victoria made an attempt to kill Jason herself, as she grabbed a pillow and planned to suffocate him, only to back out in anger and continue to serve as a means for help for Jason. The villainess had also told Alston over the phone to go to his grandmother's house, but after seeing Alston at the house later, Victoria berated him and ordered him to leave.

In the film's climax, Victoria took Jason and planned to drive him to the Kwik Mart, continuing her original murderous scheme, but after they arrived, the villainess phoned Nelson and asked why he and Wade hadn't arrived. Nelson informed Victoria that Wade had been shot (non-fatally) and that he was the only one working, while demanding $200,000 for his role and telling her to meet him at a motel, where he held Jane and Maggie captive. Victoria left and drove Jason to the destination, but while Victoria was off making her withdrawal, Jason spotted a message on Victoria's phone which revealed her role in the abductions.

After she returned to the car, Victoria revealed to Jason that the Kwik Mart was where David was shot to death, and she later pointed a gun at Jason and ordered him to get out of the car. The villaines brought Jason to the hotel room, where she informed Nelson that she had the money and ordered him to kill Jason and Jane. As it turned out, Jason had dialed 911 during Victoria's admission, and police were at the motel. At that moment, the deranged Victoria held Maggie at gunpoint and ordered her to choose between her husband or her daughter, similar to the conundrum Maggie was in ten years prior. Maggie chose herself in response to Victoria's insane demand, with the psychotic villainess accusing Maggie of taking David from her.

Maggie informed Victoria that the person she saved was a pregnant woman, and that David himself told Maggie to save her over him, with Victoria repeatedly disbelieving Maggie's statements. Victoria was informed by Maggie that David was a hero, and Victoria knew it due to how long she was married to him, after which Maggie convinced a sobbing Victoria to put down her gun. Afterwards, Victoria was handcuffed and arrested for her murderous plot. 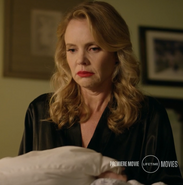 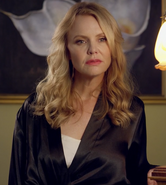 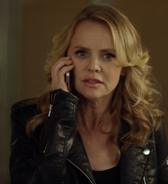 Add a photo to this gallery
Retrieved from "https://femalevillains.fandom.com/wiki/User_blog:CEDJunior/Victoria_Garrett_(Stressed_to_Death)?oldid=196449"
Community content is available under CC-BY-SA unless otherwise noted.