For unknown reasons, Tess had deep psychological issues, which were revealed by her father, Graham, to main protagonist Mariah Wilson—who had the former as her client. It was at the beginning of the film that Graham began making passes at Mariah, with the latter turning him down before leaving the house in anger over what occurred. Graham continued pursuing Mariah just as she was placing her car in gear, and after he slammed the driver's door, the car rolled backwards down his driveway. The vehicle crushed both Mariah's right arm and Graham against the gate leading to said driveway, resulting in the latter's death.

Flashbacks revealed that Tess witnessed her mother, Julia, receiving the news about Graham's demise, and it was shortly afterwards that Julia hung herself. Tess returned home to see her mother's hanging corpse and broke down in tears, but when she saw a picture of Mariah, Tess' sorrow transformed into anger, as she believed that Graham and Mariah were having an affair and that it led to Julia's suicide. Subsequently, she blamed Mariah for her parents' deaths and planned revenge against her.

Her twisted plot included her stealing the identity of Tess Harper (her real name was never revealed), a live-in caregiver who came from a known agency run by Patty Kennedy, who called and demanded Tess' driver's license. The demand turned into a face-to-face visit made by Patty, with Tess taking their conversation to Patty's car. She dropped her phone as part of her chance to commit her real objective: killing Patty, which she did by strangling her to death with her own scarf.

During her quest, Tess wrote letters directed to her deceased mother, stating that her deranged and vengeful mission was her "setting things in balance," and that she wished her mother could see her in action, claiming that she would be proud of her. As part of her mission, Tess sabotaged Mariah's work, and even began manipulating Jacob (Mariah and Greg's autistic son). She took him to her family's home, referring to the house as their "secret place." However, they were noticed by Eugene, the Wilsons' special needs worker, and he was set on telling Mariah about what he had witnessed.

With that in mind, the evil Tess planned to get Eugene out of the way, doing so by turning on the hose (knowing that Mariah warned Eugene about leaving the hose on) and also placing an electrical wire and Jacob's kite near the hose. The villainess sent Jacob to pick up his kite, and later feigned worry for Jacob as he was closing in on the kite. Just as Jacob was close to getting electrocuted, he was saved by Mariah, who believed that Eugene left the hose on and fired him. Tess further tormented Mariah by anonymously placing a newspaper clipping of her mother's suicide in front of her, and by this point, her mission was clear. She planned to take the exact things from Mariah that were taken from her, and her vengeful plan would later include causing further injury to Mariah, doing so after hearing Mariah tell Greg that she was planning on terminating her. She sabotaged an exercise machine and instructed Mariah to work on that while she played with Jacob, which led to the machine collapsing and injuring Mariah.

Tess later set her sights on seducing Greg, but by that time, Mariah had figured out that Tess wasn't who she seemed to be. Mariah walked in on Tess as she was on top of Greg, leading to a huge argument between the couple and the villainess, with police called. Unfortunately, they couldn't kick out Tess due to an agreement they signed, and their refusal to stay in the same house as Tess led to the family staying in a motel. Meanwhile, Tess used Greg's phone to send a text to his mistress, Kendra Mitchell, under the pretense that Greg was leaving Mariah for her. After Kendra arrived, Tess stabbed her to death and framed Greg for the murder. Once the family returned home and found Kendra's body, they called police, who arrested Greg due to the evidence planted by Tess.

In the film's climax, Mariah had figured out Tess' true identity as Graham's daughter, and it was at that moment that Tess sent Mariah photos of her and her deceased parents on her phone, while also using Jacob's kite to lure him out of the house. The demented villainess took Jacob to her old house, where he saw the hanging noose, which was part of Tess' plan to kill Mariah and stage her suicide. Mariah arrived at the house searching for Jacob, and it was there that Tess attacked Mariah with a bat and confirmed her suspicions. She went on a rant accusing the protagonist of having an affair with Graham and blaming her for the deaths of her parents. Mariah's truthful denial fell on deaf ears, and Jacob's attempt to stop Tess resulted in the crazed villainess lashing out at Jacob.

Tess placed the noose around Mariah's neck and began the process of killing her, pulling the rope and causing Mariah to struggle for her life. She was stopped by Jacob, who took the bat and struck the villainess right before Mariah knocked her out with a chokehold. Police later arrived and arrested Tess, who boldly confessed to everything (including the murder of Patty) and stated that her acts were done because she was a "crusader for [her mother's] soul." 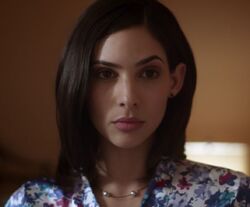 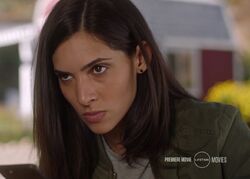 Tess' deranged stare at Jacob as she works on luring him into her clutches
Add a photo to this gallery
Retrieved from "https://femalevillains.fandom.com/wiki/User_blog:CEDJunior/Tess_Harper_(Killer_Caregiver)?oldid=176851"
Community content is available under CC-BY-SA unless otherwise noted.