Talia al Ghul (Lexa Doig) is a recurring villainess from Season Five of Arrow. She is the daughter of Ra's al Ghul, and she was introduced in the midseason premiere, "Who Are You?"--appearing in flashback scenes. Talia taught Oliver Queen five years ago; in fact, it was her teachings that completed Oliver's transformation into the Green Arrow.

However, as revealed in the episode, "Checkmate," Talia took on Adrian Chase as a student, as he was looking for revenge on Oliver over the death of his father. Talia knew full well about Adrian's murderous nature and used that to teach him, doing so because she had learned that Oliver killed her father and she wanted her own revenge. Talia's evil mentoring led to Adrian becoming Prometheus.

Talia admitted everything to Oliver, while revealing that she kept her full identity hidden. She revealed Prometheus' identity, only doing so to torture Oliver. The villainess resurfaced at episode's end and taunted a captive Oliver, while leaving him with Adrian. 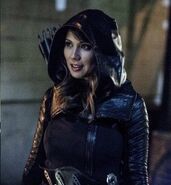 Add a photo to this gallery
Retrieved from "https://femalevillains.fandom.com/wiki/User_blog:CEDJunior/Talia_al_Ghul_(Arrow)?oldid=189969"
Community content is available under CC-BY-SA unless otherwise noted.