Start a Wiki
Sharon Vickers (Romy Rosemont) is the main villainess from the 2019 Lifetime film, Psycho Mother-in-Law (alternately titled, Mad Mom; airdate January 2, 2019). She is a widowed nurse and the mother of Amber Vickers.

Not much was revealed about Sharon's backstory, only that she lost her husband (Amber's father) when Amber was only six months old. Amber's father was dying of cancer before they got married, and it was indicated that Sharon actually killed her husband as a show of "mercy." Sharon became a nurse shortly afterwards; though, the film's early scenes showed that she was still performing "mercy" deaths, as she killed a patient of hers with a lethal injection.

Upon hearing the news about Amber getting married, Sharon traveled from Cleveland to Boston, where she met Amber's fiancee, Luke Jones, and his mother, Jill (the true main protagonist). After seeing the close friendship between Jill and Amber, Sharon became jealous to the point where she began to drive a wedge between the two, doing so by claiming that Jill was trying to control Amber. Her rage increased when she learned that Amber and Luke planned not to have a church wedding, along with Amber choosing to wear a wedding dress that Jill bought for her instead of one that Sharon made. Her envy of Jill caused her to begin sabotaging her perceived rival, leading her to turn off the electricity in Amber's house to ruin the lobster she had prepared for Amber and Luke's engagement party.

Seeing Jill as an obstacle between her and Amber, Sharon decided to take Jill out of the picture. Her deranged plan began with breaking into her home and disabling the alarm system, while also taking some of Jill's jewelry. Jill entered the home and called out to Sharon, which fit well into Sharon's plans, as the maniacal villainess pushed Jill over the stairway railing. Jill survived but was badly injured, and later on, Sharon was shown with a gag around her mouth and acting surprised to see Jill injured. After Jill was hospitalized, Sharon was interviewed by a detective; making a claim that a robber broke in and attacked both her and Jill.

Sharon later acted as a live-in nurse for the wheelchair-ridden Jill; though in actuality, Sharon was continuously drugging Jill to keep her out of the way. The villainous madwoman also kept Jill away from her assistant, Evan, who suspected Sharon's strange behavior and ended up being poisoned (non-fatally) by Sharon to keep him out of the way. Sharon also began controlling Jill's every move around the house, even putting baby monitors around the house and taking away her phone. However, Jill began to suspect holes in Sharon's claim when she asked how she got her phone to call police, as she couldn't have done so if she was tied up, leading Jill to realize that Sharon was the one who attacked her. In response, the evil Sharon forced Jill into her room, sending her off her wheelchair and later ignoring her calls for her. After halting Sharon's attempt to call for help, Sharon tied up and gagged Jill in her closet after revealing her intentions to kill Jill and stage her death as an accident.

Amber called her mother regarding Jill, with Sharon falsely claiming that Jill was being difficult, all while drugging her once again. In the film's climax, Sharon's attempts to feed Jill were interrupted by Evan, who tossed Sharon aside on his way to get to Jill. Evan saw Jill gagged and tied up and attempted to free her, only for Sharon to come from behind and snap his neck, killing him instantly. Afterwards, Jill chided Sharon for killing Evan, stating that she couldn't explain both his body and Jill's as part of her murderous plan. Sharon wrapped up Evan's body and was set to kill Jill as well, only for Jill to fight back against her tormentor, with the tussle ending with Jill smashing Sharon's face onto her cast.

After Amber and Luke returned home, Sharon ended up arrested, and the final scenes showed Sharon being confronted by Jill. Sharon asked for Amber, only for Jill to remind her that she would never see Amber again. Jill later gave Sharon a photo of Amber and Luke from their wedding, with Sharon expressing disbelief over the fact that they eloped. 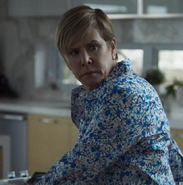 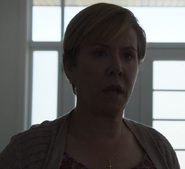 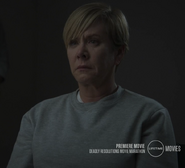 Add a photo to this gallery
Retrieved from "https://femalevillains.fandom.com/wiki/User_blog:CEDJunior/Sharon_Vickers_(Psycho_Mother-in-Law)?oldid=169071"
Community content is available under CC-BY-SA unless otherwise noted.