Start a Wiki
Sally Tremont (Marisol Nichols) is the main villainess from "Malibu Fire," episode 5.03 of Diagnosis Murder (airdate October 2, 1997). The daughter of Mailbu mayor Bill Tremont, Sally was in a relationship with Jerry Grayle, who she credits for getting her through the loss of her mother. However, while at Jerry's home, Sally discovered a message left by another woman, revealing that Jerry was cheating on her.

In a vengeful rage, Sally plotted to kill Jerry, with her plan actually starting with setting fire to the canyon; dousing an area of land reserved for condos with gasoline and dropping a lit flare. She then switched Jerry's asthma medicine with antacids used for allergies, and she tampered with Jerry's air tank--knowing he would be on call at the site of the fire. It was there that Jerry's air ran out and he suffocated to death.

When Steve Sloan found a cap to a gasoline can at the scene, the evil Sally knocked him out with a shovel--knowing that the cap would link her to the arson. In the climax, Sally found Mark Sloan investigating at Jerry's house, and it was there that she was revealed as the arsonist and murderess. Sally's motive was clearly anger over Jerry's infidelity, but when asked about setting the fire, Sally had accused the townspeople of lying to her. She claimed that they knew about Jerry's infidelity but said nothing to her, and it was at that moment that she began burning down the home. Before Sally could drop the lit flare, Howard Pucell appeared and stopped the villainess from doing so, saving Mark in the process. Sally was arrested for arson and for Jerry's murder. 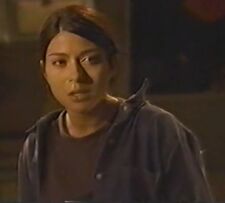 Sally's villainous reveal
Add a photo to this gallery
Retrieved from "https://femalevillains.fandom.com/wiki/User_blog:CEDJunior/Sally_Tremont_(Diagnosis_Murder)?oldid=197973"
Community content is available under CC-BY-SA unless otherwise noted.