Rita Veder's backstory revealed that she is a dhampir--half human, half vampire. Her mother was a human paranormal researcher who studied the vampires on the Caribbean Isles, where she met and fell in love with one of the vampires (Rita's father). Their relationship resulted in the conception and birth of Rita, who had spent her entire life unaware of her true supernatural identity. Rita's vampire father was killed by human hunters, which later drove her mother insane and led to her being institutionalized; later passing away months before the film's events.

In the film, Rita, a NYPD detective, was the object of pursuit from the film's main antagonist, Maxmillian, the last surviving Caribbean vampire. All the while, she continued to have prophetic visions and nightmares regarding deaths, with one of them coming true when Max seduces and kills Rita's flirtations neighbor, Nikki; with Rita overhearing the tryst and believing that Nikki was with Rita's partner, Justice. Her belief is strengthened due to Max's supernatural manipulations; placing the thought in Rita's mind while posing as Preacher Pauley (an alcoholic deacon) and Guido (an Italian-American gangster); doing so after a failed attempt at a nightclub. Rita is saved from an oncoming car by Max, who later makes a dinner date with her. Their date ends with a passionate dance between the pair, where Max sinks his teeth into Rita.

On the following day, Rita is met by Justice in her apartment, as she has slept all day following her date with Max. Justice informed Rita about Nikki's murder, and that she was displayed exactly like one of Rita's paintings. He later admits to Rita that everything that she believed in and he didn't was real, and they embraced in the aftermath. Their embrace turned passionate when Rita suddenly pounced on Justice, all the while slowly becoming a vampiress. With her fangs elongated, Rita began the process of biting Justice, only to freak out and run after seeing her reflection fade away. She returned to Max's place, where he reveals his true nature as a vampire as well as the truth about Rita's half-vampire existence, while also revealing that he was sent by Rita's father to find her. Max attempted to coerce Rita to give in to her vampire nature; doing so after attacking an obnoxious blonde woman, only for Rita to run off and refuse.

Max returned Rita to his lair, where he attempted to coerce Rita to feed off of Silas Green, only for Justice and Zako to arrive. Max escaped with Rita, but Justice, with stake in hand, approached Max's coffin, only to find Rita inside. Rita warned Justice that he shouldn't have come for her and it was too late for her, only to later rise up in her full vampire form and state that it was now too late for him, marking Rita's brief heel turn. The villainess watched in wicked glee as Max and Justice fought, with Max holding Justice by his throat. Rita was intent on feeding on Justice, punching him twice before embracing Max and showing her love for him. However, Rita took possession of the stake and killed Max, stating that the part of her that loved him had to die. With Max's demise, all of his spells wore off, which included Rita regaining her full humanity and embracing Justice. 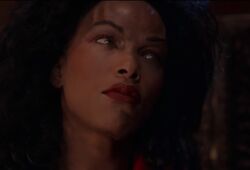 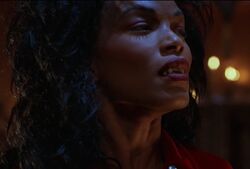 Add a photo to this gallery
Retrieved from "https://femalevillains.fandom.com/wiki/User_blog:CEDJunior/Rita_Veder_(Vampire_in_Brooklyn)?oldid=205431"
Community content is available under CC-BY-SA unless otherwise noted.