Rachel's backstory revealed that at age 16, she became pregnant during her relationship with her boyfriend Dan, and she later gave birth to a baby daughter, named Beth. Rachel's introduction into motherhood was met with anger from her mother, Sarah, who gave Rachel an ultimatum: either give up Beth or be kicked out of the house. Rachel took the former, but she would resent Sarah for (in her mind) forcing her to give up Beth.

Rachel spent four years searching for Beth, finally finding her daughter at the home of Mara and Scott Franklin, who adopted Beth and raised her, while also later welcoming their own baby daughter, Amy, into the world. She then made plans to regain Beth, beginning with getting herself hired as a nanny for Beth and Amy. Rachel's scheme also involved sending Dan to break into the home, doing so on two occasions, forcing the couple to install a security system on Rachel's recommend, with Dan performing the instillation. The villainess used the connection and access to spy on the couple.

Meanwhile, Sarah noticed Rachel's behavior regarding the family, leading her to believe that she had her sights set on Scott. Mara's encounter with Sarah revealed that Rachel had lied when she stated that she had the same security system that the couple installed, with Sarah also revealing Rachel's mental problems. When Scott talked to Rachel, she attempted to portray Sarah as a jumbled mess, revealing her father's abuse towards both herself and Sarah, and claiming that Sarah defended Rachel's father even after he passed on. She also made an attempt to seduce Scott, only for Scott to brush her off and ask her to leave.

Later on, Rachel confronted Sarah about her conversation with Mara, and it was shortly afterwards that Sarah learned that Rachel was spying on the Franklins. Sarah took Rachel's phone and called Mara to warn her about her twisted daughter, while keeping Rachel from entering her room. Rachel's attempt to push the door open sent resulted in Sarah being pushed and her head striking a hard object, killing her instantly.

After killing her mother, Rachel was confronted by Mara, who informed the villainess to stay away from her family or she'd call police. Mara later received a new password from Dan, but later that evening, the evil Rachel snuck into the house and attempted to take Beth, with Dan appearing in his disguise and revealing his role. Rachel later brandished a knife and threatened to harm Mara, who later hid in the laundry room with Scott. Mara's attempt to call police was stopped by Dan, who was then killed by Mara in self-defense.

Later on, Mara ended up confronted by Rachel again, with the deranged woman holding baby Amy and threatening to kill her unless Mara didn't give Beth to her. It was at that moment that Rachel revealed her true identity as Beth's birth mother, stating that she spent four years looking for her and that giving her up was a mistake. When Mara refused her demand, the demented Rachel placed Amy in her carriage and raised her knife in an attempt to kill her, only for Mara to take possession of the knife and slash Rachel's throat before stabbing her, telling Rachel that she told her to stay away from her family, before a fatally wounded Rachel falls to the ground, dead. 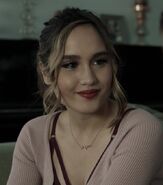 Rachel after being stabbed to death by Mara
Add a photo to this gallery
Retrieved from "https://femalevillains.fandom.com/wiki/User_blog:CEDJunior/Rachel_(The_Nanny_Is_Watching)?oldid=174464"
Community content is available under CC-BY-SA unless otherwise noted.