Start a Wiki
Paula Tolomeo (Keri Lynn Pratt) is the main villainess from "Personal Foul," episode 4.19 of CSI: NY (airdate May 7, 2008). She is a professional basketball cheerleader for the fictional New York Empires.

Paula's backstory revealed that she was once overweight, and two years prior to the events, she attended an Empires game and was selected to attempt a half-court shot for a million-dollar cash prize. Shortly after getting out of her seat, Dugan Scott (a regular at the games) derisively mocked Paula's weight: starting an "Eat a salad!" chant that was repeated by the rest of the attending crowd. Paula was humiliated with the chants once she walked on the court, and it was also revealed that her boyfriend was at the game with her--only to dump her the next day. She was also on the receiving end of those same chants even after the game.

Paula kept Dugan in her memories and spent every day of the two years that passed planning her revenge on him. She began with losing the weight by any means necessary (gastric bypass, liposuction, diet pills) and also getting plastic surgery, while also trying out for the Empires' cheerleading squad. Being on the squad gave Paula access and knowledge of the stadium seats, and knowing that Dugan was a regular, she worked on the next phase of her plan: killing him. The vengeful villainess used a poison from her houseplants as the weapon; grounding the chemical into one of her diet pills, while also grounding up an antidote in another pill. Paula took the antidote first before the game, and took the poison pill while on the court, using that order to make sure the antidote would counteract against the poison.

During the half-court shot drawing, Paula called out Dugan's seat (despite actually drawing a different seat number), and gave Dugan a kiss before his shot attempt. The attempt was successful, but Dugan dropped dead afterwards; all the while, the evil Paula gave a sinister scowl over her vengeful plan being successful. The CSI crew's investigation led to Paula's apartment, with the group seeing a photo of the then-overweight Paula and believing that she was Paula's roommate. After a scan revealed that Paula and the overweight woman were one and the same, Paula was interrogated by the crew, marking her reveal. She confessed to killing Dugan and spending two years planning her revenge on him, after which she was arrested (off-screen). 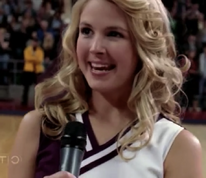 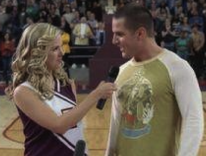 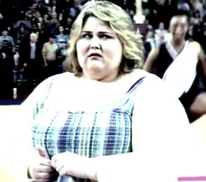 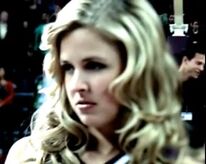 Paula's scowl after killing Dugan Scott
Add a photo to this gallery
Retrieved from "https://femalevillains.fandom.com/wiki/User_blog:CEDJunior/Paula_Tolomeo_(CSI:_NY)?oldid=172343"
Community content is available under CC-BY-SA unless otherwise noted.