Start a Wiki
Norrah Newt (Rose Byrne) is the main villainess from "Trader Foes," episode 4.05 of Angie Tribeca (airdate December 29, 2018). She is the head of a firm known as Kappa Kappa Capital.

Norrah's firm brought the attention of the Special Division Force when Phillip Grambowski was found dead in his tanning bed, as he was connected to Kappa Kappa Capital. She is, as described by Captain Chet Atkins, a notorious vulture capitalist and corporate raider, and she was suspected by the group of killing Grambowski, leading to Angela "AJ" Geils, Jr. going undercover to investigate. After AJ sold shares of Scabuble Shaving Systems, Norrah called him into her office, where she congratulated him on his commission.

However, Norrah's heel persona was established during her meeting with AJ, when she revealed that she would plant a false and scandalous story about Scabuble and unload her shares just before the company crumbles. The conniving villainess also revealed her backstory as an orphan, having been abandoned by her parents and bounced around foster homes until age 15--when she started buying and selling foster homes. Norrah bonded with AJ after she believed he was abandoned by his parents, and AJ became Norrah's best employee, leading to Norrah coearcing AJ to join her on her latest plan:  taking down the U.S. economy.

Norrah's true plan was revealed shortly afterwards:  she planned to buy every denim factory in the Koreas, knowing that jean shorts are the weakness of the United States. Grambowski also knew it and suspected Norrah's villainous scheme, leading him to pull out all of his money. After learning this, the evil Norrah killed him by locking him in his tanning bed and turning it up at the highest level. AJ refused to believe Angie when she told him about Norrah, forcing Angie to enter the firm disgused as a SEC agent so she could show AJ what his boss had been up to. Now that AJ realized the truth, he decided to help the group get a confession out of Norrah, with the villainess revealing that the French government will give the go-ahead to proceed with the plan.

When Norrah realized that she was being bugged, she punched AJ, while stating that he could have had everything and been just like her. AJ responded that what she really wanted was to make his mother proud of her, only for Norrah to punch AJ again, doing so out of anger over AJ not being orphaned. It was revealed that Kappa Kappa Capital was being raided, giving the indication that Norrah was arrested for her crimes. 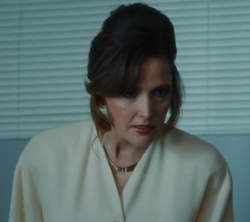 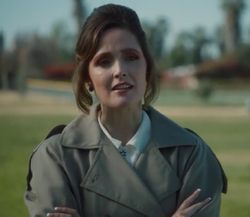 Add a photo to this gallery
Retrieved from "https://femalevillains.fandom.com/wiki/User_blog:CEDJunior/Norrah_Newt_(Angie_Tribeca)?oldid=165232"
Community content is available under CC-BY-SA unless otherwise noted.