Start a Wiki
Muriel Walker (Barbara Williams) is a villainess from the 2013 action film, White House Down. She is the wife of Martin Walker, one of the film's main antagonists and the head of Presidential Detail.

The couple's backstory revealed that their only son, Kevin, was a soldier in the Marine Corps, but was killed in a mission in Iran. Muriel fell into depression and anger over Kevin's death, as did Martin, who pressed for military action against Iran for revenge. President James Walker (one of the film's main protagonists) had enforced peace with Iran, and as a result, Martin led a group of terrorists in an attack against the White House. Muriel was first shown early in the film embracing her husband before heading out on the job; all the while unaware of his plans.

After Martin unleashed his attack, which later involved young Emily Cale, the daughter of US Capitol police officer John Cale (the other main protagonist), being held hostage along with several others, Muriel is brought in by Special Agent Carol Finnerty, who was hoping that she could talk her husband down from his rampage. According to Carol, Muriel revealed that Martin had cancer; a brain tumor that left him with little time to live, meaning that his plot was most likely a suicide mission. She later spoke to Martin via a phone speaker, stating that she had to reveal the truth about his tumor, while pleading with him to stop his plot and come home.

However, after Martin informed his wife that he was avenging Kevin, Muriel turned heel and encouraged Martin to continue his terrorist attack; urging him to "make them pay" for Kevin's death. Following this, the evil Muriel ended her call and walked away, leaving Carol shocked over her villainous actions. It can be assumed that Muriel was arrested (off-screen) as an accessory to terrorism, and as Carol promised Martin, the villainess ended up serving life in prison. 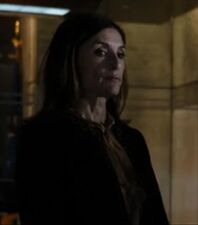 Muriel appearing to talk her husband, Martin, out of his rampage 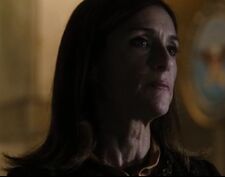 Muriel after telling her husband to continue his attack, revealing her villainous persona
Add a photo to this gallery
Retrieved from "https://femalevillains.fandom.com/wiki/User_blog:CEDJunior/Muriel_Walker_(White_House_Down)?oldid=198123"
Community content is available under CC-BY-SA unless otherwise noted.