Start a Wiki
Monica Howell (Libby Munro) is the main villainess from the 2019 Lifetime film, Mommy Would Never Hurt You (airdate March 29, 2019).

Monica Howell is a widowed mother of daughters Riley and Beth Howell, having lost her husband (the girls' father) some time before the film's events. At some point following her husband's death, Monica became a villainous madwoman and began poisoning Beth to gain her attention, with her sinister actions also turning her and her daughters into shut-ins. The beginning of the film showed Riley attempting to leave with Beth, with Riley introduced as being unaware of Monica's twisted actions, but only Riley escaped.

In the three years that passed, Monica continued her habitual poisoning towards Beth, forcing her younger daughter to become dependent on her. Riley returned home to rebuild her relationship with her family, with Monica informing Riley that Beth became diagnosed with Gullain-Barre Syndrome. The villainess claimed that her illness fully activated after Riley ran away, blaming not only her, but the doctors for Beth's illness. She also continued sealing them away from the outside world, claiming that the outside air was deadly to her. However, Riley began to suspect that something was wrong when she suddenly pulled out strands of Beth's hair while she was combing it. She sent her fiancé, Aiden (a nurse), photos of Beth's fingernails, with Aiden stating that the appearance of the nails were an indication of something other than what Monica said, while Monica listened to Riley's conversation with Aiden.

Jean, one of Monica's neighbors, became an obstacle in Monica's mind, after she delivered food and clothes that were donated from her church, with Monica snapping at her and claiming that a sweater in the package wasn't washed properly. Monica gave Riley a package to give to Jean, which contained a batch of cookies that Monica made as part of an apparent apology to her. In actuality, the cookies were poisoned by Monica, and she was kiling Jean to keep her from possibly learing the truth. Jean sampled one of the cookies and succumbed to the poisoning after she pulled over. Afterwards, the evil Monica repeatedly made attempts to keep Beth away from Riley, who she accused of making her illness worse by carrying around her cellphone. Monica ordered Riley to hand over her cellphone, claiming that she would keep it in the greenhouse due to Riley needing it for her business. Riley does, only for Monica to head to the greenhouse and smash her phone.

Monica's reveal began after Aiden received the samples of Beth's hair from Riley, as he informed Riley over the phone (unaware that Monica destroyed Riley's phone) that traces of thallium were found in Beth's hair. All the while, Monica also began poisoning Riley as well, as Riley began feeling ill and shaky much like her sister. Late one night, Aiden appeared at the house, with Monica letting him in and acting warm towards him. During their conversation, Monica gave Aiden a batch of her cookies, with Aiden sampling one of them and feeling the effects of her poisoning. The maniacal villainess watched as Aiden fatally succumbed to her handiwork, after which she placed Aiden's body in the greenhouse.

After Riley looked at her drinking cup's contents, she finally saw evidence that Monica was poisoning both her and Beth, after which she informed Beth, who didn't believe the claims. This led to Monica confronting Riley, with the deranged villainess continuing her stance that outside air would kill Beth. Riley opened a window in response, only for Monica to send Beth away and berate Riley, telling her to leave or she would call the police and tell them that Riley attempted to kill her and Beth. Riley later went to the greenhouse and saw Aiden's body, and at that moment, Monica appeared and tied Riley to a chair once she began to keel over, with the villainess revealing that she didn't give her as much of the poison as she gave Aiden. Beth, however, saw Monica tie up her sister, and having seen Monica's real persona in full form, she confronted her evil mother and ordered her to free her sister, holding herself at knifepoint and threatening to kill herself if she didn't.

Monica claimed that she didn't want to lose her daughters like she did with her husband, with Beth asking if she killed him, to which Monica denied the claim. After Beth continued her threat to kill herself, Monica acquiesced and freed Riley, after which Monica ended up tied up herself by Riley. However, Monica broke free and spotted her daughters entering their car and driving off, leading to Monica chasing them in Aiden's truck. The sisters ended up crashing, but survived, after which Monica took her daughters out of the car. All three laid down under the sunlight, with Monica claiming that she never meant to hurt her daughters. The film's final scenes showed Monica in prison being visited by Riley and Beth, as Monica had been arrested for the murders of Jean and Aiden, as well as her evil actions towards her daughters. 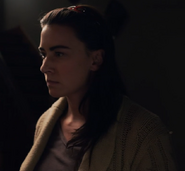 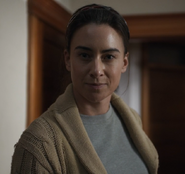 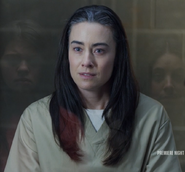 Add a photo to this gallery
Retrieved from "https://femalevillains.fandom.com/wiki/User_blog:CEDJunior/Monica_Howell_(Mommy_Would_Never_Hurt_You)?oldid=173665"
Community content is available under CC-BY-SA unless otherwise noted.