Sabrina and Miles encountered Mary Jo Ponder when Miles accidentally ran into her car while driving. Mary Jo stated that she was distracted by a puppy that crossed the street, and then exchanged information with Sabrina after apologizing. Later in the episode, Sabrina was served with a $2 million lawsuit by Mary Jo, who claimed to suffer injuries from the accident. Mary Jo, now donning a neck brace, was visited by Sabrina and Salem; the latter attempting to prove she's a fraud by walking on top of her with his claws out, but not only did that plan backfire, Mary Jo stated that the clawing would be added to the lawsuit.

Sabrina checked out Mary Jo's car and noticed that the trunk was severely damaged, which was not the case before when the accident happened. After casting a spell on the car that caused it to talk, it was revealed that Mary Jo is a villainous scam artist; she creates accidents and then intentionally causes damage to her car herself, while later making frivolous lawsuits just to get a lot of money. After getting a tip that Mary Jo would be at a gym, Sabrina turns herself into a muscular woman named Olga and infiltrates the gym, looking to expose the evil Mary Jo as a fraud. She shows off her weightlifting abilities to Mary Jo, causing the villainess to remove her neckbrace and toss her crutches aside just so she can top "Olga." After successfully lifting 500 pounds, Sabrina removes her disguise and reveals herself to Mary Jo, while reminding her that her phony lawsuit will be null and void since witnesses just saw her lift 500 pounds without problems. As Sabrina revealed in the end of the episode, Mary Jo was arrested for fraud and the lawsuit was dropped. 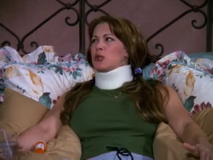 Mary Jo in her neck brace 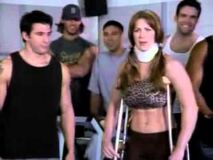 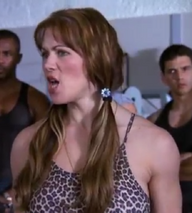 Mary Jo after being exposed as a fraud by Sabrina 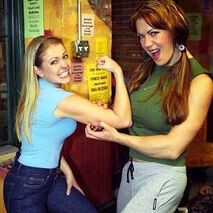 Add a photo to this gallery
Retrieved from "https://femalevillains.fandom.com/wiki/User_blog:CEDJunior/Mary_Jo_Ponder_(Sabrina,_the_Teenage_Witch)?oldid=120170"
Community content is available under CC-BY-SA unless otherwise noted.
FandomShop Newsletter Join Fan Lab