Marlowe Viccellio (Kristy Swanson) is a recurring character from Psych, who originally debuted as a villainess in episode 6.03, "This Episode Sucks" (airdate October 26, 2011).

Marlowe appeared in the beginning of the episode at a bar frequented by Carlton Lassiter, who notices Marlowe and becomes smitten by him. After engaging in a conversation that included Marlowe suddenly knowing Carlton's name and the subject of Clint Eastwood movies, Marlowe walks off, leaving Lassie waiting for her.

Unbeknownst to Lassie, Marlowe was on a villainous mission with her brother, Adrian, to abduct people with a rare O-negative blood type. Adrian suffered from a rare blood disorder that required constant transfusions, and they resorted to abductions after he was declared a liability by his health insurance company. Lassie was Marlowe's first mark, as she was supposed to drug him and abduct him, but she backed out due to falling for Lassie. Marlowe was encountered by Lassie at her home after Adrian attacked and killed a victim, as an Eternal Life necklace matching hers was at the scene. However, Marlowe still had her necklace, clearing her of the murder, and regarding her whereabouts, she stated to Lassie that she watched him wait for her while sitting in her car.

Later on, though, Marlowe turned heel again and robbed a blood bank along with her brother, stealing packets of O-negative blood. During the heist, the evil Marlowe donned a black cloak as part of her disguise, as did Adrian, and the siblings escaped once Shawn, Gus, and Jules arrived. However, one of Marlowe's black false nails was left at the scene and discovered by the trio, and it was Shawn finding a packet of O-negative blood in the villainess' freezer that revealed Marlowe as a participant in the robbery. A heartbroken Lassie handcuffed and arrested Marlowe, but during her incarceration, Adrian attacked another victim and nearly killed him. In the episode's climax, Marlowe phoned Lassie from prison and warned him about Adrian coming for him, which he does during the phone conversation. Lassie broke free from Adrian's capture and subdued him, and the episode ended with Lassie visiting Marlowe in prison, with Lassie telling his now-girlfriend that he would wait for her.

Marlowe served her time in prison, during which she helped out Lassie on a case later in the season in "Let's Doo Wop It Again." She was released in Season Seven's "Cirque Du Soul," and the couple became engaged later in the episode. Marlowe and Lassie got married later in that season in "Deez Nups," and she gave birth to their daughter, Lilly Nora Lassiter, in the eighth and final season. 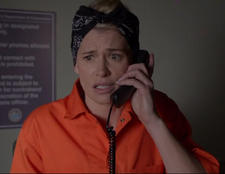 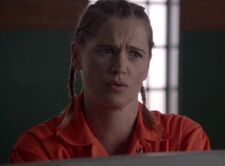