Lexi's brief backstory revealed that she formed a close friendship with Meredith Wright since childhood, mainly following the death of Lexi's mother. The two of them were living together in the events of "Chronology of Pain," with Lexi working as a law clerk for judge Natalie Rodman. Lexi had taken the job to find evidence of Natalie sending young offenders to a camp known as Nature Bound, where they were overworked and abused by Mark Duff, who ran the camp.

One of the offenders was Meredith, who was sent there after she was caught stealing lipstick, and her time there destroyed her life. When Meredith learned that Lexi was working for Natalie, she went to the bathtub and slit her wrists, feeling that Lexi betrayed her. After finding Meredith clinging to life, Lexi responded to Meredith's accusations by stating that she took the job to find evidence of Natalie's villainous collusion, and after Meredith died, Lexi became immensely vengeful. She went after Natalie by placing a bomb inside her grill, which went off and nearly killed her. However, the explosion caused Natalie's lungs to fill up with fluid and explode, killing her while she was interviewed by Angie Flynn.

Lexi later covered her tracks by cleaning Meredith's house, as it was there that she built the bomb and she wore protective gear while doing so. After killing Natalie, the vengeful villainess tracked down Duff at his auto shop, under the claim that her car needed repairs. It was at the tail end of the episode that Lexi bludgeoned Duff with a crowbar, and later killed him by lowering a car on top of him.

The series finale, "We'll Always Have Homicide," took place three years after the events of the preceding episode. In the time that passed, Lexi became a mediation lawyer, and was also in a relationship with DJ Shawn Bailey. She was also a friend of teenager Thomas Anderson, the only son of Bally and Duncan Anderson. Thomas had been on the receiving end of bullying at school due to Duncan being labeled as a rapist, as Bally's father, Trent McAllister, accused Duncan of raping Bally when they first dated. Not only was the relationship consensual, but Duncan was only three years older than Bally when they first met (ages 20 and 17, respectively), and the accusation came when Bally became pregnant and refused to abort the baby. Nevertheless, Duncan went to prison and missed Thomas' birth.

Thomas had been seeing Trent after learning that he was his grandfather, but later learned that Trent was the cause of his bullying. He vented to Lexi about it and planned to kill him, as Lexi had found a gun falling out of his backpack. Lexi talked him out of doing so, but she decided to kill Trent herself. The villainess stole a car and drove out at night to where Trent was preparing his helicopter, where she hid out in ambush. After Trent entered, the evil Lexi attacked and strangled Trent, with the assault forcing them out of the chopper, where Lexi shoved Trent into the operating propeller, which killed him instantly. Following the murder, Lexi crashed her car into a wooded area, and after she got out of the car, she cut the airbag to eliminate evidence of her theft.

While Shawn had no knowledge of Lexi's heel persona, he did notice his girlfriend's peculiar behavior, which included him seeing Lexi's bruises from the accident. She informed Shawn that she was hit by a bicyclist while running, but Shawn didn't believe her, and the relationship later ended. Angie was flown in from Paris (where she had been working as an Interpol Agent) to help out on the case, as she was on the previous episode's case, which was still open after three years. After seeing Lexi's photo, Angie went to Lexi's home and searched her, as it was revealed that cat hair was found at the murder scene--from the same cate that belonged to Meredith. However, Lexi had the warrant overturned and the evidence thrown out.

Not wanting to miss her chance to catch a serial killer (as well as the killer on her previous case), Angie again confronted Lexi regarding a revelation that she called Shawn on the night of the murder. Lexi claimed that she was home that night, but Angie stated that she would check cellphone towers to confirm her story. Realizing that she was finally caught, Lexi unleashed a knife and stabbed Angie multiple times, and later held her at gunpoint with intent on killing her to keep her evil secret hidden. After Shawn arrived, Lexi held him at gunpoint as well.

Regarding Lexi's motive for killing Trent, Angie deduced that Trent reminded her of Meredith; both should have been protected by adults but were betrayed by them. Lexi stated to Angie that killing her was for self-preservation, and that she stopped Thomas from killing Trent because he had no idea how easy it is to kill someone. At that moment, Sergeants Oscar Vega and Brian Lucas entered the home and ordered Lexi to drop her gun. When she wouldn't, Lucas shot and killed the maniacal villainess before saving Angie. 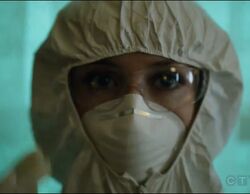 Lexi in her disguise as she cleans up Meredith's house 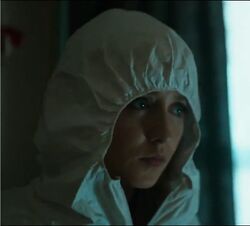 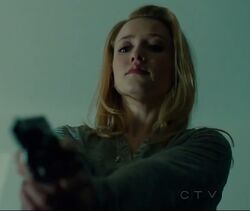 Lexi pointing a gun at Angie Flynn
Add a photo to this gallery
Retrieved from "https://femalevillains.fandom.com/wiki/User_blog:CEDJunior/Lexi_Moore_(Motive)?oldid=180474"
Community content is available under CC-BY-SA unless otherwise noted.