Start a Wiki
Kayla (Katie Boland) was the main villainess from the 2018 Lifetime film, My Daughter Was Stolen (alternately titled, Stolen; airdate March 9, 2018).

Kayla was first shown with her husband outside the coffee shop where main protagonist Alisha Barnes worked. Both women were vying for a role in a TV show, and Kayla got out of the car and punctured a hole in one of Alisha's tires, making sure that she wouldn't make the audition. The couple arrived at the audition, where Kayla gave her performance before she was informed that her car was being towed, as she was parked in an illegal space.

When Kayla returned, she saw Alisha had already auditioned, and her request to try again was turned down, as she was scolded for showing up inebriated. She later engaged in a confrontation with Alisha, accusing her of having her car towed before threatening Alisha as she drove away. At that moment, Kayla was struck by a car and hospitalized. At the time of the accident, Kayla was pregnant, but the impact caused her to lose the baby and placed her in a coma for six months.

In the four years that passed, Kayla was tended to by her half-sister, who ended up stealing Kayla's husband from her. Though Kayla recovered, she became insanely bitter and jealous of Alisha, who went on to star on the TV series, Bayou Nights, in the time that passed. In the film, Alisha's latest interview aired on TV, which distracted Kayla to the point that her cooking ended up burned. Her husband verbally and physically lashed out at Kayla, leading to Kayla killing her husband by bashing him with a frying pan, the same weapon she would  later use to kill her half-sister.

Kayla later appeared at Alisha's home posing as a fan of hers, going by the name Sadie Thompson (which Alisha revealed was the name of her character's rival). She fawned over Alisha's young daughter, Jesse, and that led to her plan to abduct Jesse to get back at Alisha. On the day of Jesse's birthday party, the psychotic villainess attacked and killed a man named Lucas Powell, who was set to work the party dressed as Jesse's favorite character, Mr. Moptop, and donned the costume herself. She later drugged Alisha and took Jesse out of the house, where she placed her in the back of the van and placed duct tape over her mouth. Kayla took Jesse to her home, and later locked her down in a room where she kept the bodies of her two victims; stating that they served as an example of what happens to people who cross her and disobey her.

Kayla kept Jesse as her own "daughter" for ten years; continuously abusing her and enforcing her habitual punishment towards her. Meanwhile, as a result of Kayla's actions, Alisha was portrayed as a drunk and neglectful mother on the day of Jesse's abduction, which was later blamed on Lucas Powell. Jesse was referred to as Jackie by the deranged Kayla, but after seeing a news report commemorating the 10-year anniversary of her abduction, she went to Kayla's secret room, which was cluttered with newspaper clippings about Alisha and the abduction. After Kayla catches her, Jesse stands up to her evil captor and makes her way out of the home. During Kayla's pursuit, the home is accidentally set on fire, with the villainess screaming for Jesse to return to her.

Jesse was returned to her father, Jeff, and lived in his home that he shared with his new wife, Valerie Saunders, and her daughter, Jude--before going back to Alisha. She had visions of Kayla even after the ordeal, though she was believed to be dead. In actuality, Kayla survived and made attempts to regain Jesse, with her latest one being in the film's climax. She appeared to Alisha's home with a knife and crept towards the front door--only for Alisha to catch Kayla and hold her at gunpoint.

Alisha placed duct tape around the hands of Kayla, who revealed her entire backstory to Alisha. She stated that she, not Alisha, should have become a big star and she accused Alisha of ruining her life, so she took Jesse to ruin hers. An angry Jesse knocked out Kayla with a punch, and she was later arrested. However, Kayla broke free from her cuffs while in the back of the police car, and knocked out the arresting officer with a punch.

Alisha and Jesse see the police car behind them, but become alarmed when they see Kayla exiting. After killing the police officer, the insane Kayla fired shots at Alisha, who sped away from the villainess. Kayla sped after them, all the while babbling over Jesse being hers. She later exited the car with gun in hand, only for Alisha to subdue her with a bat, leading to a brawl between the two women. Kayla took down Alisha with the bat, and in the aftermath, Jesse tackled Kayla and beat her up in relentless fashion; still harboring memories of the decade of torment she suffered at Kayla's hands. Kayla rose back up, only for Alisha to shoot and kill her. 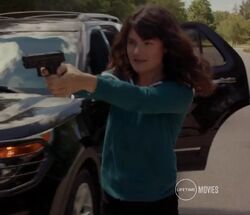 Add a photo to this gallery
Retrieved from "https://femalevillains.fandom.com/wiki/User_blog:CEDJunior/Kayla_(My_Daughter_Was_Stolen)?oldid=176289"
Community content is available under CC-BY-SA unless otherwise noted.