Start a Wiki
Karen Matthews (Heather Stephens) is the main villainess from "Still Life," episode 6.10 of CSI (airdate December 8, 2005). She is the mother of six-year-old Jesse Matthews.

Karen was introduced in the beginning of the episode as a worried mother frantically searching for Jesse, who she claimed was kidnapped. The investigation's progression revealed her backstory as the wife of Army soldier Dwight Matthews, who was killed in action. It was also revealed that Karen clashed with her father-in-law, retired soldier Warren Matthews, over Jesse, as she had kept her in-laws from seeing Jesse after Dwight's death--believing that Warren would raise Jesse to become a soldier just like Dwight.

Jim Brass spotted a boy fitting Jesse's description with a couple named Valerie and Victor Esposito, with Victor also matching Karen's description of the supposed abductor:  a man in a blue baseball cap. Brass took the couple into custody, with the Espositos stating that the boy was their actual son, Adam. Karen was elated to be reunited with Jesse, but a DNA test ended up revealing that the boy was truly Adam Esposito, and he was Valerie and Victor's son, facts that Karen refused to believe.

Warrick Brown's inspection of the photos of Karen and Jesse revealed that they were photoshopped by the former, leading the crew to believe that Karen was a deranged kidnapper. A search in the Matthews home uncovered a bottle of olanzapine, which was an anti-psychotic drug prescribed by Karen, with the prescription being four years old. Now believing that Jesse may be deceased, CSI dug into Karen's backyard, and while a body wasn't found, Warrick found a toy dinosaur, remembering that Jesse loved dinosaurs. A test revealed that there was once a body in that same spot, and that led to the final conclusion:  Karen had killed Jesse.

The aforementioned olanzapine was prescribed to Karen to treat her post-partum depression following Jesse's birth on August 31, 1999. Two years later, Dwight passed away, with Karen being sent over the edge following her husband's funeral. Karen turned heel afterwards by poisoning Jesse with her medication, and later buried her son's body in the backyard. When her neighbor's dog, Princess, was digging in that same area, the evil Karen killed Princess via strangulation, using her collar as a weapon and making the murder look like an accident before moving her son's body. The maniacal villainess committed her actions as part of her twisted way to prevent Jesse from ending up like Dwight, and her actions in the episode's events were part of her psychosis, as she stalked the Espositos and believed that Adam was Jesse.

While Gil Grissom, Catherine Willows, and Jim Brass revealed everything, Karen was shown putting on a prison jumpsuit, as she was arrested for killing Jesse four years prior. In the final scenes of the episode, Karen had delusions of Jesse calling for her, and she was shown on her knees preparing to embrace her son (in her mind). 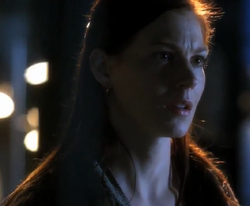 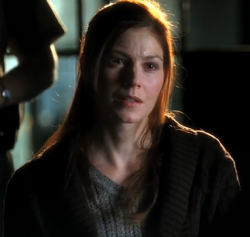 Add a photo to this gallery
Retrieved from "https://femalevillains.fandom.com/wiki/User_blog:CEDJunior/Karen_Matthews_(CSI)?oldid=177505"
Community content is available under CC-BY-SA unless otherwise noted.