Start a Wiki
Kara Danvers, aka Kara Zor-El (Melissa Benoist) is the titular superheroine in CBS/CW's Supergirl series. In episode 1.16, "Falling," Kara was the main villainess.

In the episode, Kara was inadvertently exposed to red kryptonite after saving a fireman trapped by debris. Following the exposure, Kara developed a villainous persona, beginning with wearing more stylish clothing to work. Her duties as Supergirl were also affected, as she fought off and defeated a Fort Rozz escapee, only to actually let him go. Supergirl's actions were caught on video by Siobhan Smythe, who wanted to give the video to Cat to run as a story. When Cat turns her down, Siobhan attempted to send the story to her former employers at the Daily Planet, but Kara--having heard everything--decided to send a copy of Siobhan's email to Cat, which led to Cat firing Siobhan. Kara mocked Siobhan after her firing, and later on, she began coming on to James while at a club, doing so while trashing his current girlfriend, Lucy.

Kara turned heel during a conversation with Cat, when she--as Supergirl--actually held Cat over a balcony. She dropped Cat, but saved her just in time, while saying that she no longer wants to be a hero. Kara completed her heel turn when she appeared to Alex at their home in an all black Kryptonian outfit, similar to Astra and Non, and laughed evilly at Alex after using her lasers to burn her old outfits. Kara later lashed out at Alex, who told her sister that she's not herself. However, the evil Kara stated that she feels freer than she ever did, and as she looked out the window, she made a vow to make those who don't already worship her do so, and flew off.

Kara unleashed havoc on National City, even taking down Alex during her villainous rampage. Hank, as J'onn J'onzz, engaged the villainess as a distraction for Alex to fire Maxwell Lord's antidote towards Kara. Back to normal, Kara felt extreme remorse for her actions while under the spell of the red kryptonite. 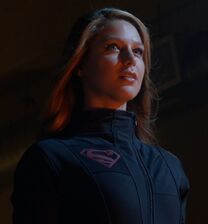 Retrieved from "https://femalevillains.fandom.com/wiki/User_blog:CEDJunior/Kara_Danvers_(Supergirl)?oldid=81089"
Community content is available under CC-BY-SA unless otherwise noted.