Start a Wiki
Josie Hart, aka Jocelyn Threllfall (Christie Burke), is a villainess from the 2019 Hallmark film, Mystery 101:  Playing Dead, the second film of the Mystery 101 series (airdate June 23, 2019).

Josie Hart was introduced as the owner of a drugstore that was robbed in the beginning of the film, which saw Claire Tate enter and end up attacked by the burglar, resulting in her hospitalization. Later on, Josie appeared after rehearsal of a play starring famed movie star Bella Brighton, revealing herself as the girlfriend of co-star Elliot Quirk. The play was the site of two near fatal catastrophes towards Bella, the first being a stage light falling close to her and the prop gun being loaded with a real bullet and fired during the performance.

After Duncan Spencer, Bella's husband, was shown angrily confronting Elliot at Bella's home, Josie stated that Elliot was in love with Bella and she was breaking up with him because of that, adding that there were email conversations between the two of them. The midpoint of the film had Amy Winslow learning that Bella died of a supposed heart attack, though during her and Travis Burke's investigation, Amy suspected foul play, and her suspicions were correct, as it was uncovered that Bella was poisoned with aconite. Amy went to Josie with the findings after Duncan was on the suspect list, as well as the reveal that she bailed Duncan out of jail recently. This led to Josie revealing that Duncan was her brother, and afterwards, she informed Amy that Elliot had known about the drugstore's alarm being down.

Elliot ended up suspected, and after a plethora of drugs were found in his shed, he was arrested not only for the thefts, but for Bella's murder. During Travis' interrogation, Elliot denied the charges against him, stating that he never committed the thefts and that he was never in love with Bella. Amy sensed Elliot was telling the truth, and regarding the sabotages at the play, Sebastian Dusquenes was behind them in an attempt to win Bella back, while it was Vincent Cuddahy who was carrying the torch for Bella.

Amy and Travis found out that the Quirks' construction company was connected to a fire that burned down a building and killed seven people, including a couple named Imogen and Nicholas Thrallfall, with the fire not being prevented due to the company not installing a sprinkler system. After remembering Josie mention the deaths of her parents earlier, Amy and Travis went to Duncan and Josie's home, where the latter found a toy monkey--the same one at the store, which revealed the siblings as the true culprits.

As revealed by Amy and Travis, Josie and Duncan's real names were Jocelyn and Oliver Threllfall, and they were the offspring of the couple who was killed in the fire 20 years prior. The children blamed the Quirk company for their parents deaths, and when Elliot arrived at Garrison, they took their opportunity at revenge. Duncan committed the aforementioned robbery and two others, to draw attention to police, all the while; the pair devised the love emails and set up Elliot as being in love with Bella. Josie later committed a fourth robbery and stole the drugs that were later planted in Elliot's shed, while Duncan poisoned Bella to frame Elliot and gain Bella's money. The evil Josie denied the claims, but after Amy stated that Claire's blood was on that toy monkey (a revealed lie), Duncan confessed, but attempted to cover for Josie by stating that he acted alone. Josie, not wanting her brother to go down alone, confessed to being the true mastermind and that they acted together to avenge their parents, after which both siblings were handcuffed and arrested. 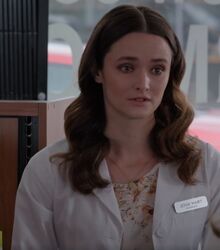 Add a photo to this gallery
Retrieved from "https://femalevillains.fandom.com/wiki/User_blog:CEDJunior/Josie_Hart_(Mystery_101)?oldid=165777"
Community content is available under CC-BY-SA unless otherwise noted.