Joanna Marie "Jo" Flay, aka Jenny Rose (Carlena Britch), was the main villainess from the 2017 Lifetime film, You Killed My Mother (originally titled, I'm Coming For You; airdate December 8, 2017).

Jo Flay was the only daughter of Lisa Arrd and Casey Flay, the latter being a career criminal and arsonist. Both Jo and Lisa were on the receiving end of physical abuse from Casey, who was also teaching Jo how to use chemicals to booby trap light bulbs. However, Jo used her father's teachings against him and murdered Casey out of revenge over his abusive ways.

The abuse drove Lisa to alcoholism, and her constant drinking led to a severe liver disease. The opening scenes of the film showed Jo at her mother's side as she was being hospitalized. Jo made demands to nurse Lynn Darcer for her mother to be saved; however, Lynn received a call from her superior, Miriam Preston, that Lisa's heavy drinking habit disqualified her from receiving a transplant, and when Jo was told the news by Lynn, Jo threatened Lynn and placed her at knifepoint. Lisa passed on, and Jo was arrested and placed in a psych ward following her assault towards Lynn.

Two years passed, and Jo--now 21--was released from the ward and picked up by her aunt Molly, who hired her as a waitress at a diner. Jo passed herself off as being rehabilitated, but she had been planning revenge on the people she held responsible for her mother's passing. Her plan included seducing Bobby Preston, Miriam's son, to get close to her main target, doing so under the name Jenny Rose. Jo's first target was Lynn, and late one night, the crazed villainess broke into Lynn's home and laced one of her light bulbs with a deadly chemical. After the bulb blew, Lynn ended up inhaling the smoke and succumbing to the effects, and following Lynn's death, a fire was set with another trap set by Jo--who even took off with Lynn's pet cat. She gave an evil smile over her handiwork, stating that Lynn "got what she deserved."

With the help of her lover, Jimmy Cooper, Jo engaged in a business meeting with Rock Ramirez, with the scheming vixen using the meeting to poison Rock, as he was part of Jo's vendetta. Jo's next victim was Susanna Barrett, the vengeful ex-wife of David Barrett (Miriam's lover). She followed Susanna to a parking garage and shot her to death, leaving David to be accused of the murder. All the while, Jo prepared to escape to Venezuela; acquiring cash and credit cards from Rock's safe, and gaining fake IDs and passports from Hal, a family acquaintance. The plan was for Jo and Jimmy to escape there together, but she found herself falling for Bobby and ended up knocking out Jimmy and leaving him for dead.

In the film's climax, Jo took Bobby to a secluded home owned by her aunt Molly, and prevented Miriam from contacting her son. After the couple made love, Jo attempted to coerce Bobby into leaving with her to Venezuela, only for Bobby to refuse--seeing it as a long-term goal. Bobby later showed Jo his portrait of her, and shortly afterwards, Jo had a psychotic fit, as she expressed anger over Bobby seeing her in such a positive light. She referred to herself as dark and horrible, right before she knocked out Bobby and tied him up.

Hours later, Bobby woke up to see Jo planning to kill him, with the villainess referring herself as a monster to Bobby. She revealed her entire vengeful plot against Miriam, and as she had her gun pointed at Bobby, she was suddenly surprised by Jimmy--who survived Jo's attempt and had a gun pointed at her. Miriam reached the house in time; after which Jimmy pointed his gun at Miriam before he was fatally shot by Jo. Jo turned her attention to the true subject of her anger: Miriam. She accused Miriam of killing her mother and stated that Miriam should lose everyone close to her just as Jo did. Miriam blamed herself for Lisa's death and told Jo to go after her and not Bobby, and at that moment, police arrived and fired a non-fatal shot at Jo, while warning her to drop her weapon. Jo persisted and pointed her gun at the police, who shot and killed her. 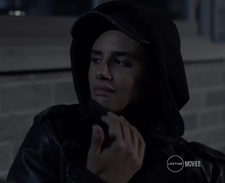 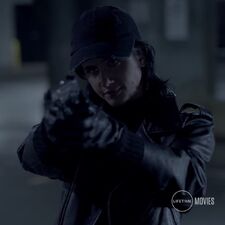 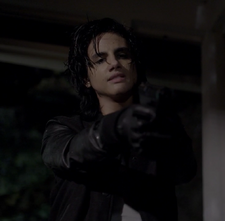 Add a photo to this gallery
Retrieved from "https://femalevillains.fandom.com/wiki/User_blog:CEDJunior/Jo_Flay_(You_Killed_My_Mother)?oldid=174481"
Community content is available under CC-BY-SA unless otherwise noted.