Start a Wiki
Jessica Moore (Sarah Minnich) is the main villainess from the 2019 Lifetime film, Pregnant and Deadly (originally titled, Dying for a Baby; airdate May 4, 2019).

Jessica Moore's backstory revealed that two years prior to the events, she was in a car crash when her vehicle collided with one driven by Amber Smith (the film's main protagonist). Though both women survived, Jessica was pregnant at the time of the crash, and not only was her unborn baby killed, but she had an emergency hysterectomy, preventing her from ever having children. Despite Jessica's distracted driving causing the crash (a flashback revealed that Jessica's attention was towards her cellphone), she blamed Amber for the crash and for the loss of her unborn baby.

Jessica's marriage fell apart following the crash, as she was arrested on charges of domestic violence towards her husband, David Moore, who later filed a restraining order against Jessica. Everything was brought up during Jessica's attempt to adopt in the beginning of the film, as she was reminded that her criminal record prevents her from adopting, which drove Jessica into a rage before she was ejected. Jessica resorted to scheming to acquire a baby of her own, later approaching a young woman named Taylor and paying her to allow her baby to be adopted by Jessica. However, Jessica overheard Amber's appointment at the hospital after her fainting spell, and learned that Amber was pregnant with a boy with her husband, Kyle, giving Jessica an opportunity for revenge against Amber.

Jessica's scheme included an attempt to move into the guest home of Amber and Kyle's neighbor, Charlotte, only for a young woman named Devon to take the vacancy. She tracked Devon to her apartment, with Jessica's appearance causing her to drop her beverage on the kitchen floor, after which Jessica attempted to buy her way into replacing Devon. Devon turned her down and kicked Jessica out, but while doing so, she slipped on the aforementioned spill and struck her head, with the fall killing her. After Devon's accidental demise, Jessica phoned police and stated that an unknown man had broken into the home, covering up her presence before moving into the guest house. The villainess befriended Amber as part of her plan, which also included becoming a volunteer nurse at the aforementioned hospital.

After informing Amber about her and David expecting a son, Jessica was shown meeting with Don, a male escort, as she was paying him to pose as David. She was overheard by Nicole Patterson, a friend of Amber's, who confronted Jessica after witnessing the meeting. Afterwards, the sinister Jessica backed up her car and ran over Nicole, killing her instantly. Jessica introduced "David" to the couple and to Morgan, Amber's mother, who informed Amber that she recognized "David" as an escort due to a friend of hers being linked to him. In addition, the scheming villainess sabotaged Amber's medical files by putting in notes labelling Amber as a schizophrenic who was willing to give up her baby.

Amber and Morgan each had their suspicions regarding Jessica's demeanor, with the former's suspicions coming after she overheard Jessica referring to Jonathan (Amber and Kyle's about-to-be born son) as her own son, leading to a confrontation. Morgan sent her longtime friend, Natasha, to do a background check on David Moore, only for their conversation to be overheard by Jessica, who tracked Natasha to her bakery. At that moment, the evil Jessica struck Natasha with a rolling pin, and set the stage as a break-in before responding to Natasha's pleas for mercy by dropping a heavy sack on her head, killing Natasha. Amber and Morgan, along with Kyle, had learned the truth about Jessica and David's marriage upon hearing about Natasha's murder; meanwhile, Jessica completed her plan to sabotage Amber's files and went to Dr. Davis' office after quitting her job.

The villainess seduced Davis in his office before making out with him in her car, where she later drugged him. Jessica did the same to Amber after arriving at her home, and after knocking out Kyle with a golf club, she woke up Davis and ordered him at gunpoint to induce Amber's labor, which a reluctant Davis does. Jessica escaped with newborn Jonathan, but not before turning on the gas in an attempt to blow up the house, only for Amber to escape with an unconscious Kyle. The deranged madwoman drove Jonathan to her former home and showed David "their" new baby, stating that they could be a family and Jonathan's presence would fix things between them. David's attempt to get though to Jessica was met with the villainess pointing a gun at her estranged husband and continuing her delusions that her actions were committed to save their marriage.

Amber, having found Jessica's old address, went to the house and confronted Jessica, who maintained her stance that Amber was to blame for the loss of her unborn baby and informed her that she now knows what Jessica herself felt after the accident. Amber reminded Jessica that Jonathan was her baby and not Jessica's, leading to Jessica lashing out and asking why Amber gets to be a mother and not her, before David made an attempt to disarm his psychotic wife. Jessica attacked David and made an attempt to kill Amber by wrapping her bare hands around her neck, only for Amber to send Jessica through her glass door. Jessica was arrested (off-screen) afterwards, and the final scene--which took place a year later--showed her in a mental institution cradling a baby doll. 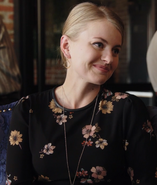 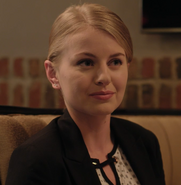 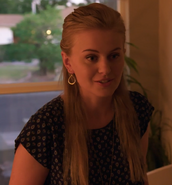 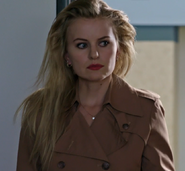 Add a photo to this gallery
Retrieved from "https://femalevillains.fandom.com/wiki/User_blog:CEDJunior/Jessica_Moore_(Pregnant_and_Deadly)?oldid=175602"
Community content is available under CC-BY-SA unless otherwise noted.