Rachel Temple's backstory revealed that regarding family, all that was uncovered was that she was abandoned as a child. In her teen years, Rachel fellow high school senior Dustin Bowen, though as his sister, Savannah, witnessed, Rachel was very controlling of Dustin, often forcing him to spend his entire time with her and keeping him from his friends. Having had enough, Dustin broke up with her, and in response, an enraged Rachel shot Dustin to death.

Rachel escaped her villainous past and changed her name to Grace Gable five years prior, and in the film's events, she answered an ad posted by Lydia and Drew Jackson, looking for a nanny for their son, Billy. Grace charmed the couple and held up Billy, who she referred to as Thomas. However, Grace's admiration for Billy became an obsession, which also included a need to want Lydia's life. Having seen Grace's true psychotic demeanor, the couple's attempt to fire her was met with murderous response from Grace, as she killed Drew and kept Lydia chained up in the basement, forcing her to provide breast milk for the newly named Thomas.

Grace's first encounter with Natalie Westport (the film's protagonist) came when she stopped Hannah's (Natalie's infant daughter with husband Ryan) stroller from rolling away. Natalie formed a friendship with Grace, leading to Natalie inviting Grace to join a mommy group with her. The villainess later began an affair with Tony, the husband of one of Natalie's friends, Maria, with Maria finding out and staying with her mother, Bianca. Meanwhile, Natalie not only found out about the affair as well, she learned about Grace's real name, Rachel Temple, leading her to ask Grace why she changed her name. Grace claimed that she was wrongly accused of killing her boyfriend in high school, and that she moved on and changed her name to avoid backlash and scrutiny.

However, Natalie's meeting with Savannah revealed Grace/Rachel as a deranged psychopath, and it was later on that Grace went to Tony's house looking to continue their relationship. To Grace's dismay, Tony referred to their affair as a mistake and stated that he loved Maria, prompting the insane Grace to pick up a knife and threaten to cut her wrist, while pleading with Tony to tell her he loved her. Tony embraced Grace, who later plunged the knife into him and gave him another chance to profess his love for her. When Tony didn't and attempted to call for help, the evil Grace stabbed her lover to death, cleaning up the scene afterwards and changing into one of Maria's dresses.

Natalie informed Roz (another of her friends) about what she learned about Grace, and after realizing that she had a locked closet in her house, she entered the home and managed to enter by breaking the doorknob. She did so after not hearing from Maria and thinking that Grace did something to her. After hearing muffled noises, Natalie ran to the area expecting to find Maria, only to find a bound and gagged Lydia Jackson, who revealed herself as having been captured by Grace. When Natalie went to call for help, Grace appeared and pointed a gun at Natalie, while chiding Natalie for leaving Hannah alone in the house. Natalie informed Grace that she had called police, after which Grace shot Natalie (non-fatally) and locked her in the freezer, which is where Drew's body was.

Afterwards, Grace attempted to force Lydia to provide more breast milk for Thomas/Billy, only for Lydia to stab Grace's arm with a screwdriver. Grace attacked and knocked out Lydia in response, and was later visited by Roz as she prepared to kill Lydia, after which Grace set out on killing her after Roz figured out the truth about her. The villainous psychopath searched for Roz while wielding a gun, only for Roz to appear and disarm her with a fireplace poker. After Grace subdued Roz, Natalie--having escaped from the freezer--struck the villainess with the poker, only for Grace to attack Natalie and threaten to kill her with the same weapon, while adding that she had hoped that they could be friends. At that moment, Lydia escaped from her capture and fatally shot Grace; Grace has enough time to turn around to face her shooter and realize she has lost before she dies. 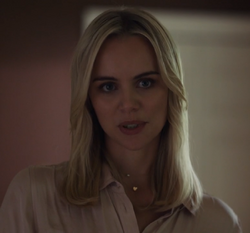 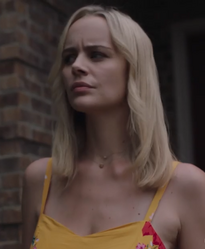 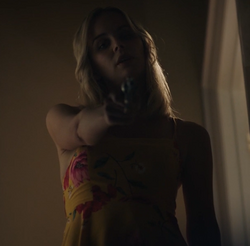 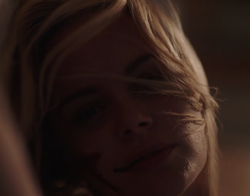 Add a photo to this gallery
Retrieved from "https://femalevillains.fandom.com/wiki/User_blog:CEDJunior/Grace_Gable_(Mommy_Group_Murder)?oldid=175703"
Community content is available under CC-BY-SA unless otherwise noted.