Start a Wiki
Francine Langstrom, aka She-Bat (Meredith MacRae; 1944-2000), is the main villainess from "Terror In the Sky," the 37th episode of Batman:  The Animated Series. She is a scientist and the wife of fellow scientist Dr. Kirk Langstrom, who became the villainous Man-Bat in the episode, "On Leather Wings." With Batman's help, Kirk was cured of the Man-Bat serum, which was invented by Francine's father, Dr. March.

It was in "Terror In the Sky" that Francine inadvertently became infected by the serum, as it occurred when she caught her father recreating it in the lab. Started by his daughter's presence, March dropped the beaker that contained the serum, and while helping him clean up, a shard of the glass cut Francine, allowing the serum to enter her bloodstream. Now infected, Francine transformed into the evil She-Bat, and she was shown in the beginning of the episode in her villainous form wreaking havoc. Unlike Kirk, Francine had no memories of her transformation, and when the creature was reported to authorities, she was led to believe that Kirk was taking the serum again.

With that belief in her mind, Francine left Kirk, and was on a plane heading out of Gotham. She was followed by Kirk, who vowed that he wasn't the creature and Batman had proof. It was at that moment that Francine felt strange and went into the washroom, where she again transformed into She-Bat. Francine turned heel in the process, as the scene officially revealed her as the villainess, and in her feral state, the evil Francine forced the plane door open and flew out. However, Kirk was knocked unconscious by the falling cabin pressure and he was sucked out, leading She-Bat to grab him as he fell.

She-Bat flew with Kirk to the Gotham Bridge Tower where she was confronted by Batman. After a very difficult fight, Batman managed to shoot She-Bat with the antidote, and Francine reverted to her human form. In a dazed state, Francine almost fell off the bridge, but Kirk had come around and caught her. The two embraced as he declared the nightmare was over. 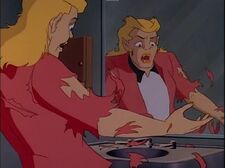 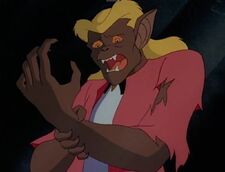 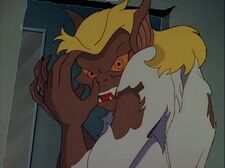 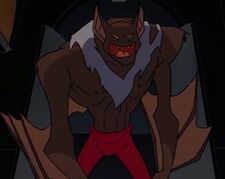 Add a photo to this gallery
Retrieved from "https://femalevillains.fandom.com/wiki/User_blog:CEDJunior/Francine_Langstrom_(Batman:_The_Animated_Series)?oldid=103268"
Community content is available under CC-BY-SA unless otherwise noted.