The Female Villains Wiki
Register
Don't have an account?
Sign In
Advertisement
in: Blog posts, 2010s, Axe,
and 22 more

Emma Kerrigan is a health store worker and the widowed daughter of 10-year-old Lexy Kerrigan, and her backstory revealed that her husband, John, passed away in a car accident sometime in 2010. Before she became widowed, Emma developed scieroderma, and after John's passing, Emma had her husband cremated and his ashes spread in her tomato garden. This was part of her personality as a fanatic naturalist, and sometime after John's death, her skin disease was cured.

However, Emma believed that John's ashes cured her, and even worse, she became a delusional hypochondriac, as she would see scabs on her arms and face. In only a six-month span, Emma made 30 visits to the ER, but when her claims weren't believed, she resorted to kidnapping as part of her twisted plan to cure herself of a disease she believed she had.

Emma's victims were fit young men, and the episode's beginning saw her abduct Terry Rodgers, who she overdosed wtih melantonin. Terry was Emma's fourth victim, as she had done the same to Gary Ellard, Paul Hicks, and Barry Deaver; drugging all of them and stalking them until they were knocked out. Afterwards, the maniacal villainess would strip her victims nude and bind them with duct tape, after which she force fed them a cocktail of soil additives and animal feed--via tubes through their noses. Emma discovered that Terry was actually diagnosed with cancer, leading her to drown Terry and dump his body in the river, as he did not meet Emma's insane qualifications. All the while, Emma kept Lexy away from the barn to keep her demented activities a secret.

Gary Ellard was Emma's next murder victim, as she decapitated him and placed the rest of his remains in a wood chipper; after which she used the chopped remains as fertilizer (she would later do the same to Barry Deaver). She had her latest hallucination of her disease returning, and after this occurred, the evil Emma stalked and abducted a pregnant woman named Cheryl Winslow, and later performed a C-section on her. This was done to get the baby's placenta, which Emma consumed, after which she stitched up her abdomen and left her and her baby (both survived) in the parking lot of a hospital. Emma was relieved when she looked in the mirror, as her "disease" was gone, but when she attempted to feed the placenta to Lexy, the young girl knocked the bowl off the table, leading to Emma snapping at her daughter.

Emma would later hallucinate and see the disease on Lexy, and when she became worse (in her mind), the insane villainess drugged her daughter and buried her in the soil. She later took Paul Hicks to Lexy and began cutting his wrist, believing that his blood would "cure" Lexy. At this point, the BAU arrived at the home after learning about Emma and her actions, and after catching Emma with Paul and Lexy, Dr. Alex Blake coerced Emma to put down her knife, claiming that she had John's ashes and that they would cure Lexy. Emma took the plastic bag and spread the ashes on Lexy (unaware that they were from Emma's fireplace) and she was later taken into custody. 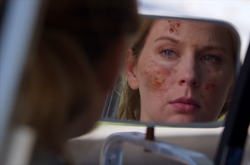 Anne's diseased appearance (in her own mind) 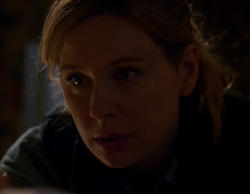