Emily Nelson, aka Hope McLanden (Blake Lively), is the hidden main villainess from the 2018 film, A Simple Favor.

Hope McLanden was originally part of a set of triplets, but while she and twin sister Faith were born healthy, their sister--named Charity--was stillborn. Hope and Faith's backstory revealed that they came from an abusive household, with the violent torment coming from their father, who was shown beating one of the sisters after both were dragged away from a party. Hope and Faith decided to set a fire inside the house in an intentional plan to kill their father, which was successful, and after this, the pair decided to go their separate ways.

Hope built a life for herself in New York, changing her name to Emily Nelson and later marrying college professor Sean Townsend. The marriage mainly centered around Emily's deceit and manipulation, which included a revealed incident where Emily stole a ring belonging to Sean's mother when they visited her in England. Emily boldly showed off the ring and admitted to steaiing it, stating that she had no plans to return it and coerced Sean into letting her keep the ring to "spare his mother's feelings." This was followed by a tryst in the plane's bathroom--which resulted in the conception and eventual birth of their son, Nicky.

In the film's events, Emily appeared as a friend of Stephanie Smothers, a vlogger and the main protagonist, leading to a friendship forming between Nicky and Miles (Stephanie's son). While the kids were playing, Stephanie takes a photo of Emily for a project, but Emily orders her to delete the photo, expressing a desire to not be photographed. At some point, Emily tells Stephanie to pick up Nicky for her, which she does, but days pass without Emily showing up. Stephanie was informed that Emily was in Miami, but in actuality, Emily/Hope was contacted by Faith, and she went to their old bible camp to meet her. It was the first time the sisters had seen each other in 14 years, and Faith informed Hope that she was out of money. Faith also said that she plans on confessing everything to the police, stating that while they would be arrested, at least they'd be together, while also demanding $1 million for her silence.

Faith left their cabin and went into the lake to go swimming, with Hope removing her clothes and following suit. Hope apologized for the distance between them and hugged faith, but afterwards, Hope turned heel and drowned Faith, who put up a struggle before finally succumbing. With her sister dead, the evil Hope put her plan in action to pose Faith as Emily to collect a $4 million insurance payment which would take care of her family's massive debt. The ruse originally works, and "Emily" is found dead in the lake. Shortly afterwards, Sean and Stephanie began a romantic relationship, only for the latter to be "haunted" by Emily; in actuality, it was Hope making the call to Stephanie to mess with her.

Stephanie began digging into Emily's death, and a visit to artist Diana Hyland revealed that Emily went by Claudia when Diana painted her portrait, and it was a further investigation that revealed Emily's true identity as Hope McLanden, and that she had a twin named Faith. Stephanie posted a Vlog that cryptically stated that she found out the truth about Hope/Emily, and it led to the villainess appearing and meeting Sean, who she attempted to blame for the insurance scheme. After investigators appeared at the house regarding Emily being alive, Stephanie met Hope at "Emily"/Faith's grave, where Hope revealed everything, except intentionally killing Faith--she claimed it was an accident.

After Hope plays a recording of her conversation with Sean, which had Sean proclaming his love for Emily and dismissing Stephanie as just a fling, the two women decided to set up Sean in Emily's murder. Hope played her part by striking herself with a wrench and claiming to have survived Sean's attempt, which ended up with Sean arrested. However, Stephanie appeared with a gun and actually shot Sean in an attempt to get Hope/Emily to confess to killing Faith, which she does. In a twist, Hope had known that she was bugged, so she cut the wire and sent the police to Darren's home. She ordered Sean to get up, as she knew that he wasn't dead, and she later pulled out a gun with intent on killing both Sean and Stephanie, as they knew too much about her evil actions. Hope shoots Sean in the shoulder, and then moved towards Stephanie, who made small talk and actually asked her to go on a vlog with her and confess everything. The villainess turns her down, only for Stephanie to remind her that they were actually live, as she had a nanny cam hidden in one of the buttons of her dress.

The live stream not only captured Hope's confession, but also caught her shooting Sean as well. Knowing she was caught, Hope ran out of the house, with Stephanie chasing after her. While standing on the street, the deranged Hope pointed her gun at Stephanie and stated that she would never replace her as Nicky's mother, only for Hope to be run over by Darren. Hope survived and attempted to crawl away from police, only to end up captured and arrested. The epilogue revealed that Hope/Emily was sentenced to 20 years in prison for killing her father and sister (along with the on-air attempt to kill her husband), and she was adjusting well to prison life, as she was shown playing basketball in the prison courtyard. 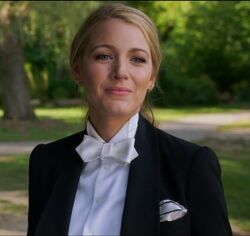 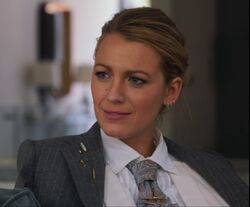 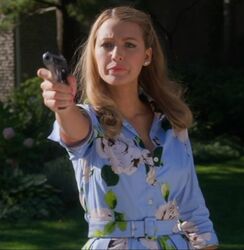 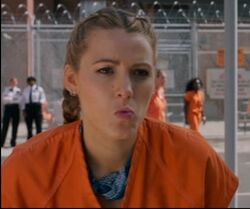 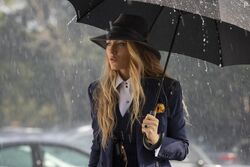 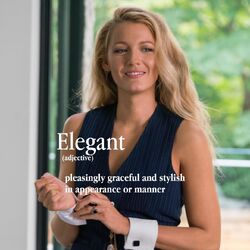 Add a photo to this gallery
Retrieved from "https://femalevillains.fandom.com/wiki/User_blog:CEDJunior/Emily_Nelson_(A_Simple_Favor)?oldid=170331"
Community content is available under CC-BY-SA unless otherwise noted.
FandomShop Newsletter Join Fan Lab