Frame her best friend for the murder (failed)

Not much was revealed regarding Elle's backstory, only that her parents split up due to Michelle's belief that Elle's father was cheating on her. Elle and Michelle's mother-daughter relationship was immensely close--to a point that it was perceived as unhealthy by Margy Beynes later in the film. In the beginning of the movie, Michelle voiced her belief to Elle that David was cheating on her, stating that his late nights working were proof. Later on, Elle heard a gunshot and rushed into Michelle's bedroom, only to see that her mother had committed suicide.

Following her mother's death, Elle became angry and distant, with the center of her fury being David. She believed her mother's delusions about David and blamed him for driving Michelle to suicide, leading to Elle planning a murderous revenge on David. After learing about her longtime best friend, Anna Bellcroft, getting out of jail after serving time due to a DUI charge, Elle decided to use her in her sinister plot. Elle got herself hired at David's company, and she placed Anna there as well, introducing her under her middle name, Georgia. During her scheme, Elle would see visions of Michelle urging her to continue her villainous and vengeful actions towards David.

Elle's plan was to make it appear that David and Anna were romantically close, as she set up situations that would leave them alone together. This included drugging Anna's drink while the three of them were at a business meeting inside a restaurant, which forced David to take Anna home. David's assistant, Cammy Beynes, suspected something about Elle and Anna after seeing "visitor" name tags from Anna's prison, leading to Cammy learning about Anna's true identity. She heard Elle during one of her psychotic moments (talking to her deceased mother), which led to a verbal confrontation. Later that night, the evil Elle spotted Cammy riding her bike and ran her down in her car, killing her.

It was after this that Elle put her plan in motion to not only kill David, but frame Anna as well. She planted fake diary entries that depicted Anna as a woman who was obsessed with David, and later that evening, Elle took her mother's gun (which she retrieved earlier in the movie) and used Anna's toothbrush to place Anna's DNA on the weapon. The deranged villainess later entered David's room and angrily lashed out at him for cheating on Michelle and causing her suicide, with David denying being unfaithful and stating that he loved Michelle. Elle later pointed the gun at David and shot him to death, and she placed Anna's hair on the body. After Anna arrived and saw David's body, Elle returned and acted shocked at the discovery, but later revealed her evil personality to Anna by accusing her of killing David.

Elle's plan works, and Anna is the prime suspect in David's murder, leading to Anna hiding out in the home of her former cellmate, Sugar Delarosa. Charlie Cook, Anna's love interest, uncovered Elle's scheme on his laptop, and Anna's visit to Cammy's mother, Margy, gave revelations regarding Elle and Michelle's twisted relationship. In the film's climax, Elle received an email that had video of her drugging Anna's drink, and it was during David's funeral service that Anna confronted her villainous former friend, who grabbed a knife and pointed it at Anna. In a fueling rage, Elle admitted to killing David and voicing her hatred for him, and stated that she killed Cammy because she wouldn't stay out of her life. After seeing Michelle one more time, police arrived and arrested Elle for the murders, and the film's final scene showed her in a mental hospital playing checkers with her delusional vision of Michelle. 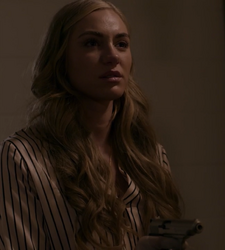 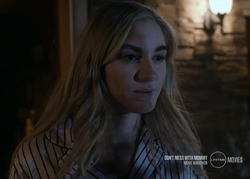 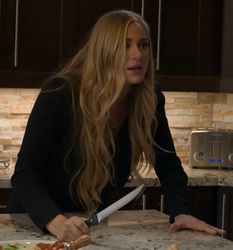 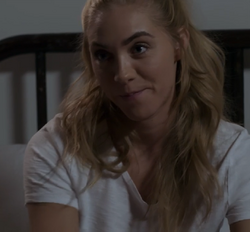 Add a photo to this gallery
Retrieved from "https://femalevillains.fandom.com/wiki/User_blog:CEDJunior/Elle_Spencer_(A_Daughter%27s_Revenge)?oldid=201708"
Community content is available under CC-BY-SA unless otherwise noted.