Nine years prior to the film's events, 12-year-old Elle Fawcett (as shown in the beginning of the film) overheard her parents, James and Margot, fighting in the living room of their house, with the former informing the latter that he wanted to divorce her. During the argument, Margot gave a jumbo envelope to James that contained photographic proof that he was having an affair with Caroline Winters (who was briefly separated from her husband, Sam). Following this, Margot took out a gun and pointed it at her unfaithful husband. Elle then heard two gunshots, and ran in to see that her mother had shot and killed her father, before turning the gun on herself: a murder–suicide. Following her parents' deaths, Elle lived with her aunt and uncle until the age of 18. She blamed Caroline for the deaths of her parents, and plotted revenge against her.

Elle, now 21, was shown following Caroline and taking pictures of her and Sam, and then followed her to a hardware store, where she acted friendly towards Caroline. She later accepted Caroline's offer to move in with her, but she noticed she had competition in the form of Kelci Chartrand; the niece of one of Caroline's friends. Elle later hacked into Kelci's accounts and canceled her credit cards, which lowered Kelci's credit score and resulted in Caroline choosing Elle to move in to her guest house. Following this, the vengeful villainess planted cameras all over the room, and also flushed Caroline's medication down the toilet.

While listening in on a conversation between Caroline and her neighbor, Hannah, Elle learns that Sam had a brief fling with a woman named Beth Smith, with Beth's name being brought up after Hannah voiced her suspicions about Elle. All the while, Elle continued her act towards Caroline, even offering to help her on a project at her job. She later caught Hannah looking at her mother's diary, prompting Elle to manipulate Caroline into believing that Hannah has been spying on her. Elle later drove Devon (Caroline and Sam's son) to a party, where she seduced Derrick into taking off his shirt and also trying to intiate a sexual tryst with her. She later recorded a short video of him planting kisses on her neck before suddenly scratching Derrick as part of her plan to order him to stay away from Becca and Devon, threatening to accuse him of raping her if he didn’t comply.

Later on, Elle posed as Sam and sent his former mistress, Beth, texts stating that he missed her and wanted to meet, and also created a “profile” for Sam on MarriedButFree.com, a website for adulterers. She also planted a pair of women's underwear in the laundry as part of her plan to cause friction in Caroline's marriage. Elle's plan works, and she watched with twisted glee as Sam and Caroline fought after the latter found the former's “profile” on the website. She also plagued Logan as well, using video of her art study session as well as the video of herself and Derrick to trick Becca into believing that they were together, resulting in Becca canceling their date to the prom. The villainess also sabotaged Caroline's presentation by replacing her flash drive with a blank one.

In the film's climax, Beth visited the home looking for Sam, only to be bludgeoned to death with a fireplace poker by Elle. Sam walked in and saw Beth lying dead in the living room, and it was at that moment that Elle knocked out Sam with a frying pan. Elle later phoned Caroline and told her about Beth being at the home, which led to Caroline returning to the house. It was at that moment that Elle appeared with a gun in hand and revealed her true identity as the daughter of Caroline's former lover, as well her vengeful plan. Elle stated that she went after Beth because her affair with Sam prompted Caroline to have her fling with James. Her true plan was to kill Sam and Caroline and make it look like a double murder–suicide involving Beth, planning to do so to make Logan feel what she felt after losing her parents. It was after Logan returned home that she attacked Caroline, and then went after Logan; threatening to kill Caroline if Logan called the police. Caroline later shot Elle (non-fatally), and Logan locked Elle in his room until police arrived and arrested her.

The final scenes show Elle in prison showing her drawings to a psychiatrist, who stated that she would recommend Elle for good behavior. However, when Elle returned to her cell, she revealed a sketch of Caroline and angrily crumpled it, while screaming that Caroline ruined her life. 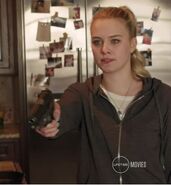 Elle pointing a gun at Caroline 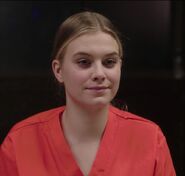 Elle in prison
Add a photo to this gallery
Retrieved from "https://femalevillains.fandom.com/wiki/User_blog:CEDJunior/Elle_Fawcett_(One_Small_Indiscretion)?oldid=194609"
Community content is available under CC-BY-SA unless otherwise noted.