Start a Wiki
Eileen Townsend (Lynne Cormack) is a villainess from "Damsel in Distress," the eighth episode of Dracula:  The Series. She is the mother of the series' main protagonists, Christopher and Max Townsend, and she first appeared in the pilot episode, "Childen of the Night," having arrived in Europe with Chris and Max. While there, Eileen meets multi-billionaire Alexander Lucard at an embassy reception, but Chris and Max later learn the truth about Lucard: he is really Count Dracula, now running a multi-billion dollar business.

Eileen wouldn't learn about Lucard's dark secret until "Damsel in Distress," where she is having a dinner meeting with Lucard at his castle. Chris and Max, along with their uncle, famed vampire hunter Gustav Helsing, attempt to warn Eileen, but Gustav is captured, leaving the boys on their own. They arrive at the castle to warn Eileen when Lucard suddenly appears. The boys wielded their crosses at Lucard, but at that moment, Eileen turned heel and revealed herself as a vampiress, showing her fangs and hissing at the boys while knocking the crosses from their possession. After Chris and Max escape, Eileen laughed evilly and danced with Lucard.

Later in the episode, the evil Eileen taunted Gustav down in a dungeon where Lucard held him captive, stating that she loved being a vampire and she adores Lucard. Lucard and Eileen are confronted by the boys, Gustav, and Sophie at the climax, where Lucard orders Eileen to turn Max. However, Eileen's motherly love for Max overcomes her villainous persona, and she hugs her son before fainting and later being freed from the vampire curse. 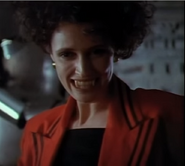 Eileen as an evil vampiress

Eileen embracing her evil side
Add a photo to this gallery
Retrieved from "https://femalevillains.fandom.com/wiki/User_blog:CEDJunior/Eileen_Townsend_(Dracula:_The_Series)?oldid=124478"
Community content is available under CC-BY-SA unless otherwise noted.