The Female Villains Wiki
Register
Don't have an account?
Sign In
Advertisement
in: Blog posts, 2010s, Ambitious,
and 15 more

Dr. Sepi Chamanara (Azita Ghanizada) is the main villainess from "The Worms Crawl In, The Worms Crawl Out," episode 6.17 of Elementary (airdate August 20, 2018).

Dr. Sepi Chamanara is a scientist and the colleague of zoology professor William Velnik, the episode's murder victim. Velnik was found shot, but the actual cause of death was a stab wound, and after a group of suspects were questioned, attention turned to Sepi, who revealed that she had a sexual tryst with Velnik--a known ladies' man.

Sepi was also the creator of a bulletproof hoodie, using silkworms to create the prototype and a number of copies. After a photo of Velnik wearing the hoodie was revealed, Sherlock Holmes and company suspected Sepi, believing that Velnik stole the hoodie and Sepi killed him for that reason. However, Sepi stated that she gave the hoodie to Velnik and she had no motive to kill him.

While Sepi's claim that she gave the hoodie to Velnik was true, she was revealed as Velnik's killer, but for a different motive. It turned out that Velnik was sent by John Hoyt to sabotage Sepi's work (for a price), doing so by killing the trees that her silkworms were feeding on. The plan was to keep Sepi from getting a lucrative contract that Hoyt was after, and after hearing gunshots while at her lab, Sepi rushed towards the area and found Velnik with three bullet wounds, but still alive due to the hoodie. She grabbed a screwdriver as a weapon to protect herself, but after seeing that Velnik was doing research on root-knot roundworms, Sepi realized that Velnik was the one who killed her trees.

Following the revelation, Sepi turned heel in a fit of rage by killing Velnik with the screwdriver, and after the murder, the evil Sepi used Velnik's research to kill all of her competitors' mulberry trees, doing so to guarantee that she got the contract. It was after Hoyt's reveal in the conspiracy that they learned about Sepi getting the contract, and that ended up revealing her as the villainess. Sepi was interrogated by Captain Thomas Gregson and Detective Marcus Bell, with the latter uncovering Sepi's bloody fingerprint on the prototype. The villainess confessed to killing Velnik, stating that people have a drive to get rid of anything that gets in their way, and following her confession, Sepi was arrested (off-screen) 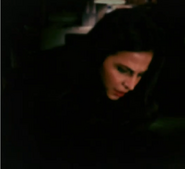 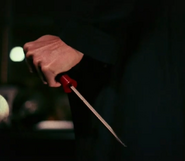