Start a Wiki
Dr. Natalie Barnes (Dina Meyer) was the main villainess from the 2018 Lifetime film, Evil Doctor (alternately titled, Snatched; airdate April 7, 2018). She was a Los Angeles-based OBGYN who was visited by the film's protagonists, showbiz couple Aubrey and Matt Lewis.

The film revealed that Natalie had a tragic backstory; she came from a broken home and had a childhood traumatized by her father's suicide. In adulthood, Natalie's attempts at becoming pregnant were unsuccessful, leading to the point where she and her lover kidnapped a child years before the film's events, only for their victim to be returned safely. In the film, Natalie performed her duties for Matt and Aubrey, though she was planning to take the child following conception.

Natalie's twisted plan began with sabotaging Aubrey's cervix, which led to bleeding once she and Matt had sex. The plan resulted in Natalie becoming their regular doctor and getting closer to the pregnant Aubrey, as well as Matt, who she made a pass at after following him to a nearby gym. The villainess' continuous seduction led to a one-night stand between her and Matt, which she recorded on video; meanwhile, Janelle (Aubrey's sister) began to suspect an affair as Natalie appeared at Aubrey's baby shower. In response to Janelle's accusations, Natalie claimed that she was a lesbian.

Natalie began harassing Matt following their tryst, and later invited Aubrey's best friend, Vicky Dolan, to her home, where she seduced and made out with her before revealing her past problematic attempts at pregnancy. She later asked Vicky what she thought about her own affair with Matt before playing the video of them together, which was followed by the psychotic villainess pointing a gun at Vicky and shooting her to death. After killing Vicky, the evil Natalie continued to tend to Aubrey, and was later confronted by Matt regarding his suspicions about Vicky's murder, only for Natalie to drug Matt.

Meanwhile, Aubrey was told about Matt and Natalie by Janelle, while later going through labor pains. With the baby coming, Aubrey was taken to the hospital by Janelle, only for Natalie to appear and knock out Janelle with a crowbar, which she would later use to knock out a doctor and a nurse on her way to Aubrey. After Aubrey gave birth, Natalie took the baby (a girl) and left, only to later escape to the rooftop once she saw police at the hospital. It was there that she was confronted by Matt, who attempted to talk Natalie to returning his new baby daughter by stating that they could raise her together. Matt's coercion works, and he received the baby, but shortly afterwards, Natalie began to topple over and was hanging on to the metal ladder. As Natalie was hanging on for dear life, she saw a vision of her deceased father, before she fell to her death. 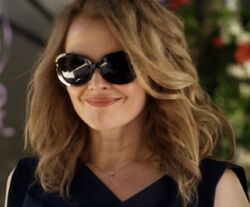 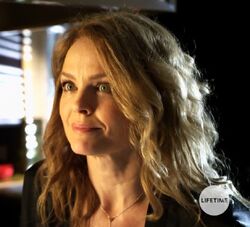 Add a photo to this gallery
Retrieved from "https://femalevillains.fandom.com/wiki/User_blog:CEDJunior/Dr._Natalie_Barnes_(Evil_Doctor)?oldid=174821"
Community content is available under CC-BY-SA unless otherwise noted.