Dawn McLaughlin (Dendrie Taylor) was the main villainess from "Pathological," episode 19.10 of Law & Order: SVU (airdate January 10, 2018). She was the mother of 15-year-old Mariel McLaughlin, and also the wife of Lou McLaughlin.

Dawn's slight backstory revealed that she had been abused by her stepfather as a child, and during this time, she would tell her mother about the abuse, making it seem worse than what it actually was so she could stay home from school and also spend time with her mother. After becoming a mother herself by having a daughter—who she named Mariel—with Lou McLaughlin, Dawn put her talents of manipulation to far more evil uses after she developed Munchausen syndrome by proxy. The villainess purposely gave Mariel various medications in order to worsen her health, doing so throughout her childhood and even into her teenage years, as part of her cold-hearted plan to force her daughter to become dependent on her.

In the opening minutes of the episode, Mariel—who became unable to walk as a result of her mother's habitual poisoning of her—had a seizure at her special needs school while she was having sex with classmate Cody Hill (who she was in love with), which led to Dawn and Lou meeting with SVU. The child abuser's sinister sabotage of Mariel's health was revealed during an investigation into the matter; as part of achieving her self-absorbed objective, she would take her daughter to various doctors, but only to the ones that would confirm that Mariel was ill. She revealed her abusive backstory to Dr. Elizabeth Olivet, who later confirmed that Dawn is competent to stand trial, but she'll need help. Meanwhile, Mariel was hospitalized and informed about what her mother had been doing to her, but later on, the evil Dawn attempted to take her out of the hospital, which led to Amanda Rollins and the other SVU detectives forcibly ejecting the manipulative con artist out of the room.

Back at their home, Mariel confronted Dawn and informed her that she wanted to see Cody, only for her callous mother to snap back at her and tell her that she is the only one capable of tending to her, while also forbidding her from seeing her sexual partner. In response to her cruel and insensitive words, Mariel killed Dawn by striking her head with a hammer. 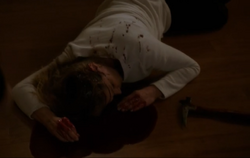 Dawn after being killed by Mariel
Add a photo to this gallery
Retrieved from "https://femalevillains.fandom.com/wiki/User_blog:CEDJunior/Dawn_McLaughlin_(Law_%26_Order:_SVU)?oldid=168936"
Community content is available under CC-BY-SA unless otherwise noted.
FandomShop DC Trivia GalaxyQuest