Start a Wiki
Dana Lewis, aka Star Morrison (Marcia Gay Harden), is the hidden main villainess of "Secrets Exhumed," episode 14.14 of Law & Order: SVU (airdate February 13, 2013). She is an FBI Agent who appeared in three previous episodes of the series before her reveal as a villainess in "Secrets Exhumed."

Dana Lewis was originally introduced in episode 7.06, "Raw," as Star Morrison, a member of the Revolutionary Aryan Warriors, a white supremacist group. In actuality, Dana infiltrated the group as part of her undercover sting and investigation of the murder of African-American child Jeffrey Whitlock, which was committed by RAW member Brannon Lee Redding under the order of Jeffrey's adoptive parents, Mark and Janice. She eventually revealed herself as an FBI Agent when she shot and killed Kyle Ackerman to save Elliot Stabler during a shooting rampage in a courtroom.

Dana returned in the eighth season opener, "Informed," during Olivia Benson's investigation into a woman named Haley Kerns, who was revealed as an informant for Dana. The episode had Haley informing Dana and Benson that there was a planned attack against Gen-Eng Foods, but following Haley's heel turn and reveal as the mastermind behind the terrorist plot, Dana ended up shooting and killing Haley just as she was about to detonate a bomb inside a Gen-Eng office. Dana's undercover work in "Raw" served as a key role in her third appearance in episode 12.08, "Penetration," as she was raped by Seth Coleman (a member of the RAW faction) under the orders of Brian Ackerman, who was seeking revenge on Dana for Kyle's death. The episode also had a vengeful Dana attempting to kill Seth after cornering him at gunpont at a construction site, only for her shot at him to miss and instead ricochet and strike Stabler.

Dana's return in "Secrets Exhumed" had her being encountered by Benson and Nick Amaro regarding the case of Brian Traymor, a paralyzed inmate and serial rapist who was accused of raping and killing five women, one of them being Kira Stanger, a kindergarten teacher. Kira's murder was committed back in 1987, but despite admitting to the four other victims, Brian denied raping and killing Kira. The denial was followed by Kira's parents also stating that Brian didn't kill their daughter, and after this, Dana later interrogated Brian herself and managed get a confession. However, after Kira's fiancée, Noah Bunning, appeared and revealed that he had known Dana, as they had dated, Amaro began to suspect that Dana was Kira's killer—suspicions that would be proven true as the episode progressed.

Dana had dated Noah for about six or seven years and became pregnant by him by 1987, only for Noah to inform Dana to get an abortion, stating that he wasn't ready to be a father. However, just months later, Noah began a relationship with Kira, who also became pregnant by him, but this time, Noah proposed to her. He informed Dana of the news regarding him and Kira, and it sent Dana into a rage, leading to a confrontation with Kira at her home a week later. Dana attempted to convince Kira to end things with Noah, but Kira stated that she and Noah were deeply in love, and in response, Dana strangled Kira to death. The villainess used the same MO as Brian Traymor in an attempt to frame him (using athletic tape to commit the murder and stuffing latex gloves in Kira's mouth), and she worked the case and portrayed her actions as a break-in and fingering Brian as Kira's rapist and murderer. Dana became an FBI Agent in the years that passed, feeling that her position could make up for her murderous past. Despite this, however, Dana turned heel once again by stealing evidence that would connect her to the murder, committing the theft a decade before the episode's events.

In the episode, Dana had claimed to Benson that she had to recuse herself from the case, but after Amaro voiced his suspicions to Benson, Dana ended up in a conversation with Benson that turned into an interrogation. Cragen appeared and revealed Dana's deception regarding her role in the case by telling her that the original detective sends his best to her, and that led to Benson further grilling Dana. By this point, Dana's heel persona is revealed, as she displayed arrogance towards Benson as well as Amanda Rollins, while continuing to deny killing Kira. Rollins would later reveal Dana's role in stealing the evidence, and also revealed that there was blood on Kira's fingernail clippings, but even then, the evil Dana remained defiant.

Amaro, meanwhile, was speaking with Noah, who revealed everything that happened in his relationship with Dana, including the fact that Dana was angry when he told her about him and Kira. After this, Amaro joined Benson and Dana in the interrogation room, where Dana's pregnancy and abortion was revealed. The villainess claimed that she had no intentions on starting a family, and even denigrated Kira by referring to her as a woman who was trying to "trap" Noah. Benson finally got to Dana when she revealed her true reason for her career: to make up for what she had done, feeling that (in her mind) her work with the FBI would cover up the fact that she was an evil murderess all those years ago. After breaking down, Dana finally confessed, revealing her anger and jealousy of Kira, as well as admitting to killing her. Following her confession, Dana was handcuffed and arrested by Amaro. 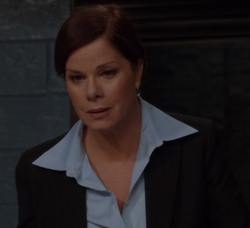 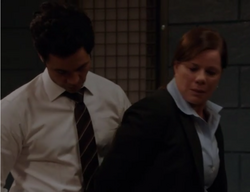 Dana arrested by Nick Amaro
Add a photo to this gallery
Retrieved from "https://femalevillains.fandom.com/wiki/User_blog:CEDJunior/Dana_Lewis_(Law_%26_Order:_SVU)?oldid=176580"
Community content is available under CC-BY-SA unless otherwise noted.