The Female Villains Wiki
Register
Don't have an account?
Sign In
Advertisement
in: Blog posts, 2000s, Attempted Murder,
and 20 more

Daisy Reid worked at a coffee shop and appeared as a friend of the film's main protagonist, radio host Jill Peterman. However, Daisy's backstory revealed that she was the mother of Hayley Reid, who was in a relationship with Brett Cundall--who worked security at the building where Jill's show records. Brett engaged in an affair with Jill, and when Hayley suspected Brett of cheating, Daisy urged Hayley to call Jill's show, unaware that Jill was the other woman.

On that evening, a year prior to the events, Hayley phoned and introduced herself as Alexis, venting over her her boyfriend's infidelity. Jill--unaware that she was speaking to her lover's girlfriend--informed Alexis that she needed to "cut him loose" and stated that Alexis needed to end her pathetic lifestyle. Though Alexis lashed out at Jill, asking her how she could sleep at night, she decided to take Jill's advice to an extreme by committing suicide via gunshot.

In the year that passed, Daisy found out that Jill was the other woman, and she blamed Jill for Hayley's suicide. Her anger at Jill subsided when Jill went on a hiatus after the call, as she blamed herself for what happened. However, in the film's events, Jill (reluctantly) returned to the show under the suggestion of her boss, Stuart Wells, and upon learning about Jill's return to the radio, Daisy turned heel and planned a murderous revenge. Jill was her planned target, and the film's midpoint saw Daisy appear in a hooded disguise and stab who she thought was Jill to death, only to see that she had killed Jill's best friend and producer, Claire Ashton.

Daisy continued her friendly demeanor towards Jill as she was facing suspicions of killing Claire, and even confiding in Jill that she knew what it was like to lose someone close to her, because she lost her daughter a year prior. She added that the loss was hard on her, but she was coming to terms with it in her own way, a cryptic hint of Daisy's villainous and vengeful demeanor.

The film's climax saw Brett suspected of killing Claire when it was revealed that he had a side exit from the area where the murder took place. He later went to Jill and told her that he was suspected, while also revealing that he had hooked up with Claire while attempting to get back with Jill. An angry Jill kicked Brett out of her apartment, and afterwards, he was stabbed to death by Daisy. After finding Brett's body, Jill went on the radio and called out the killer, knowing that she was the target, and daring that person to call her show.

Shortly afterwards, Jill received a call from Daisy, brushing it off as a weird occurrence until Daisy asked Jill how she could sleep at night. This began Daisy's reveal as the murderess, and she revealed that not only was Alexis her daughter, but Alexis' real name was Hayley--Brett's girlfriend. The maniacal villainess stated that she told her daughter to call her regarding her relationship, and later chided Jill for her suggestion to "cut him loose," while also accusing Jill of urging Hayley/Alexis to kill herself. It was revealed that Daisy was making this call from inside the studio, and at that moment, the evil Daisy entered and pointed a gun at Jill, completing her reveal.

During her rant, Daisy stated that she thought Jill had remorse when she went on her hiatus, only to change her tune when Jill returned to the air. She confessed to killing Claire and Brett, stating that while the former was mistaken identity, it was still worth it because she was sending a message to Jill. The deranged madwoman later revealed her intentions to kill Jill, with a gunshot coming afterwards. It was revealed that Jill had taken out a gun of her own and shot Daisy to death in self-defense, with Jill revealing this to police in the final scenes.

A close-up of Daisy's knife during her murderous heel turn 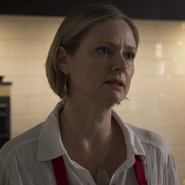 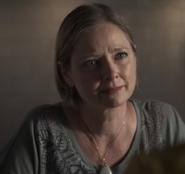