Start a Wiki
Carla Royce (Shari Headley) is the main villainess from "The Cover Girl," episode 5.10 of Matlock (airdate November 20, 1990). She is a model and the girlfriend of Conrad McMasters.

Carla's backstory revealed that she and her sister, Monica, both became models working for Jackie Whitman's agency. However, Monica became addicted to drugs as well as the lifestyle of a model, and was even arrested for possession of cocaine. Jackie was able to get the charges dropped, and while Carla pleaded with Monica to seek treatment, Jackie (who controlled the careers and lives of both sisters) kept her working; dismissing Monica's drug addiction. Under a year prior to the episode's events, Monica was killed in a car accident, and following this, Carla took a month off, only to return to work for Jackie. However, Carla blamed Jackie for her sister's death, and spent months planning revenge.

After arriving at a shoot with Conrad, Carla witnessed Jackie's shouting match with photographer Harry Samuels, and decided to use that as part of her plan to kill Jackie. The villainess set things in motion by making one phone call to Harry to get him out of the studio, and another to get Jackie into the studio. Carla waited in ambush with a pair of Harry's scissors to use as a weapon, but had to hide once a delivery boy arrived; and turned on the radio to make him believe that Harry was inside. When Jackie finally arrived, the evil Carla stabbed Jackie to death with the scissors, and as part of her scheme, Harry ended up being accused of the murder.

However, during the murder, bottles of acid were knocked over and some splashed on Carla's left arm, leaving a burn. Carla donned long sleeves to hide the burn and cooked up an alibi claiming that she went swimming.

Conrad asked Carla if Jackie and Bobby Michaelson, who had informed Conrad that he owned part of a modeling agency in New York, got along with each other, Carla told Conrad that Jackie and Bobby “fought like cats and dogs.” Carla then explained it wasn’t easy being Jackie’s partner, much less one of her models. After Conrad asked why, Carla explained that Jackie was a control freak: “The clothes I wore, the parties I went to, jobs I took — she insisted on having the last word in everything. It was infuriating.” When Conrad asked her why she went along with Jackie’s advice, Carla explained that nine out of ten times, Jackie was right.

But during her latest date with Conrad, her acid burn was noticed. After Carla ranted about Jackie, Conrad was asked about her alibi, but realizing that his girlfriend is the actual killer, Conrad called Matlock (who was approached by both Conrad and Carla to defend Harry) — leading to a cross-examination in the episode's climax. The acid burn was pointed out as evidence of Carla's villainous role, with Carla claiming that the burn was caused by spilling coffee. Once Matlock showed Carla's phone records and revealed that Carla's prints were on the bottles of acid, Carla stated that she wouldn't answer any more questions until she sees her lawyer. Following this, Carla was officially arrested (off-screen). 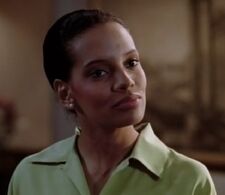 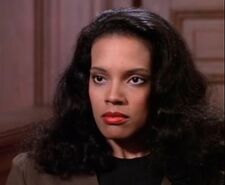 Add a photo to this gallery
Retrieved from "https://femalevillains.fandom.com/wiki/User_blog:CEDJunior/Carla_Royce_(Matlock)?oldid=176996"
Community content is available under CC-BY-SA unless otherwise noted.