Beverly was introduced in the pilot episode as a psychotherapist and the proprietress of a bed in breakfast in Eureka. She works (mostly) with high powered clients, though some of Eureka's townspeople have been part of Beverly's clientele; among them being Zoe Carter, the daughter of town sheriff Jack Carter. The end of the pilot revealed that Beverly had a connection to Walter Perkins, who used stolen military technology to complete his Prototye Tachyon Accelerator. She was shown conversing with Walter's wife, Susan, who stated that she would look into Walter's work and whoever he was working with, and in response, Beverly turned heel by revealing that she poisoned Susan, doing so to keep her from finding out the truth.

As the first two seasons progressed, it was revealed that Beverly was working for a sinister group known as The Consortium, and their main target was a mysterious artifact inside Global Dynamics' Section Five. Her plan included killing Kim Anderson, which Beverly does by sabotaging Kim's computer, causing the artifact to react and burn her alive. Henry Deacon learns this in the episode "Sight Unseen," and in the second season finale, "A Night at Global Dynamics," Beverly planned to use a relocation teleporter on Allison Blake's son, Kevin, who was autistic, to separate him from the artifact--though she was also planning on using Kevin as a lab rat for The Consortium. She later used the device on herself, and was presumed deceased.

The Season Four opener, "Founders' Day," saw Carter, Henry, Allison, Jo Lupo, and Douglas Fargo end up travel to 1947 and return to a different timeline, and it was in the final scenes of "Stoned," that Beverly returned and met with Dr. Trevor Grant, who traveled from 1947 to the present. She coerced Grant to take a weapon from GD, under the pretense of promoting peace, only to reveal her true plans to use it for her own use and also send Grant back to 1947 and further her plans. Carter and Grant ended up foiling the scheme, but by the end of the midseason finale, "I'll Be Seeing You," Beverly stated in a conversation with her superiors that she had a new target in mind, suggesting that she was going after Allison.

The Season 4.5 opener, "Liftoff," revealed that Beverly lured Allison with an auto accident, and it was uncovered in the end of the episode, "Up In the Air," that Beverly was using nanotechnology to control Allison. The following episode, "Omega Girls," revealed Beverly's plan:  she was going to hack into Eureka's data and steal it, with part of her plan including placing the entire town into a coma, leaving Jo and Zoe to work together to stop Beverly's plan. The latter half of the protagonistic duo tracked Beverly to the roof of GD, where she fires a taser gun at the villainess, allowing Allison to regain control of her own body.

The end of "Lost," the fifth and final season opener, revealed that Beverly had successfully gained control of the entire crew of the Astraeus Ship, having placed them in a virtual future. After Dr. Holly Marten was killed by a virtual version of Carter--caused by the true mastermind, Senator Michaela Wen--in the following episode, "The Real Thing," Beverly voiced her indignation to Wen, only to be told off in response. Beverly defected from The Consortium in "Force Quit," redeeming herself (and completing a double turn following Wen's heel turn) by helping Carter, Henry, and Jo take down the virtual world, while also saving Carter from being stuck permanently and killed. In the end of the episode, Beverly placed Wen in a simulated version of Carter's office, and her redemption is further cemented in the series finale, "Just Another Day," when she turned over information about the Consortium and Wen's location in exchange for Grace Monroe's release. 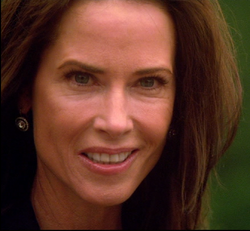 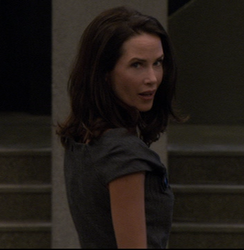 Add a photo to this gallery
Retrieved from "https://femalevillains.fandom.com/wiki/User_blog:CEDJunior/Beverly_Barlowe_(Eureka)?oldid=169802"
Community content is available under CC-BY-SA unless otherwise noted.