In 1987, Beth Glynner's older sister, Teresa, and the parents of the main protagonists participated in "The Stalker Club," which had the participants playing a game where one of them would "stalk" the others, and the "victims" had to guess who the stalker was. Teresa was one of the "victims," and her frantic behavior was noticed by Beth, but she was unaware of what was going on. The "stalker" in the game was Anna, and she approached Teresa in her home one night. Teresa ended up accidentally falling down the stairs to her death, which is where Beth found her.

It wasn't until two years before the events of the film that Beth finally learned about the game when she saw a journal among Teresa's things. As revealed in the journal, the participants made a pact not to tell anyone about the game or about what happened to Teresa, and after reading those details, Beth plotted vengeance on the group. Between that point and the movie's events, Beth became a teacher at a high school attended by the group's offspring (Ashley, Chloe, Mark, Darren, and Sadie), and sent them texts asking them to participate in The Stalker Club. Beth's first victim in the game was Mark, beginning with placing bees inside his gym bag, which stung him after he opened it. The villainess later entered Mark's hospital room and injected a chemical into his system, killing him.

Sadie was next, as Beth entered her home and stabbed her to death, while making the death look like she committed suicide. In her murderous spree, the evil Beth donned an all black outfit complete with a white mask; similar to the look that the group had on 30 years ago, and she attempted to go after Ashley after school, only for Ashley to escape and pull the fire alarm. Thinking that Chloe could be the actual killer, Ashley and her friend Meredith attempted to catch Chloe in the act, only for her to end up killed by Beth, who slashed her throat.

In the film's climax, Beth attacked Darren with her knife before going after Ashley in her home. It was at that moment that Beth removed her mask and revealed herself as the villainess, as well as revealing herself as Teresa's sister. Beth stated to Ashley that she blamed her victims' parents for what happened to Teresa, and she planned on taking everything away from them just like she lost her sister. Karen, Ashley's mother, later confronted Beth, stating that she attempted to tell the rest of the group to stop the game when it went too far, and tried to coerce Beth to hand her the knife and end it. After Beth refused, Ashley smashed a vase over her head, and Karen managed to remove the knife from Beth's possession. The crazed Beth later clutched Ashley's throat, continuing to attempt to kill her, before she was fatally stabbed by Meredith. 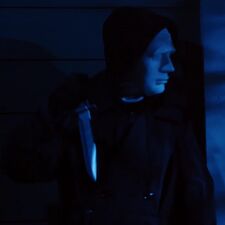 Beth Glynner in her villainous disguise 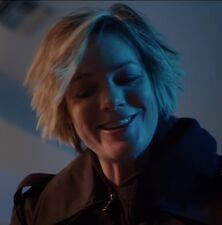 Beth revealed as the villainess
Add a photo to this gallery
Retrieved from "https://femalevillains.fandom.com/wiki/User_blog:CEDJunior/Beth_Glynner_(The_Stalker_Club)?oldid=169521"
Community content is available under CC-BY-SA unless otherwise noted.