Barbara "Barb" Stone (Traci Lords) is the true main villainess of Lifetime Movie Network's 2016 film Nightmare Nurse (airdate March 5, 2016). She is a nurse at a local hospital where protagonists Lance and Brooke end up after they are injured in a car accident, which killed a man named Darren Wells and broke Lance's right leg.

Barb tended to the couple after the accident, and the pair are later left in the care of Chloe Spade at their home. She ended up replacing Chloe as the in-home nurse of the two protagonists after she was accused of drugging Lance with oxycodone, all after the former acted flirtatious towards the latter. In addition, Barb also kept Chloe from reentering their home when she attempted to maintain her innocence in drugging Lance. Barb later called Lance from the hospital and informed him that Chloe had attempted suicide via an overdose of oxycodone, and she was later shown tending to Chloe at said hospital.

At that moment, however, Barb turned heel when she revealed to Chloe that she paid her $2,500 to ruin the lives of Lance and Brooke. The vengeful villainess scolded her henchwoman for failing to get the job done, while also revealing that she had replaced Chloe's anti-depressant medication with placebos, which explained her erratic behavior. Barb also let slip that she took care of Chloe's boyfriend James (heavily implying that she had killed him offscreen), and drugged Chloe further before placing her in her car next to James' body. Barb drove back to the protagonists' house and gave Lance a batch of her cookies, which she laced with drugs (in her words, the drugs were "something extra special" she put in said cookies).

After Lance suddenly feels exhausted as a result of said drugs, the evil Barb revealed herself as the fiancée of Darren Wells (the man killed in the accident), and also established her heel persona to him with a wicked chuckle as she admitted to being the person who drugged Lance earlier, which was all part of her true villainous plan: to murder him. When Brooke attempted to take her down with one of Lance's crutches, Barb responded by punching her in her face and then striking Brooke with the crutch, temporarily rendering her unconscious. Barb also faced Chloe, who pointed a gun at her and ordered Barb to back away from Lance. After falsely promising to double Chloe's pay to $5,000, Barb quickly subdued Chloe and drugged her for the second time. Barb again attempts to proceed with murdering Lance, only for Brooke to knock her out for good. Her official fate is never revealed, but it can be assumed that she was arrested offscreen.

Barb turning heel and revealing that she paid off Chloe 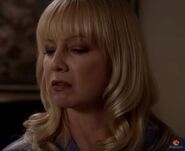 Barb revealing to Lance that she was Darren Wells' fiancée

Barb preparing to drug and kill Lance
Add a photo to this gallery
Retrieved from "https://femalevillains.fandom.com/wiki/User_blog:CEDJunior/Barbara_Stone_(Nightmare_Nurse)?oldid=169081"
Community content is available under CC-BY-SA unless otherwise noted.