Avenge the death of her son by killing Daphne Hart (failed)

Audra Monrose's backstory revealed that she was the mother of young Mason Monrose, and she was also divorced from her husband, after learning that he was having an affair with their babysitter, Claire Carven. Audra turned heel and went on a murderous and vengeful rampage, and as shown in the beginning of the film, the maniacal villainess killed Claire during one of her other babysitting jobs, doing so by placing a plastic bag over her head. She had also made attempts to poison her ex-husband as well, after he gained full custody of Mason.

Later in the film, Mason was hospitalized and had been tended to by (among others) nurse Daphne Hart, the film's main protagonist. Her superior also checked on Mason, but after he stepped away from the monitor, Mason took a turn for the worse and passed on. Daphne was left to shoulder some blame for Mason's death, but upon learning about her son's death, Audra swore revenge on Daphne, as she held her fully responsible.

Daphne, thanks to her friend Kaci Washington, got a job as a sitter for young diabetic Toby Andrews, and it was during the film's midpoint that Audra appeared to Daphne and introduced herself as a maid for the Andrews family. She acted cordial to Daphne as she told her story about how she lost her job as a nurse, as well as the end of her relationship with her boyfriend, Jeremy. Jeremy later appeared to Daphne and acted apologetic in an attempt to win her back, only to be turned down, and afterwards, Jeremy ended up killed by Audra in his car, with the villainess strangling him to death with a wire.

The film's climax saw Daphne and Kaci both pursued by Audra, who was in a cloaked disguise and wielding a knife. The villainess chased the pair of protagonists around the house, with Kaci later drawing her away from Daphne and Toby by activating her car alarm. She hid from Audra, only to be found out and pursued by the murderess. Though Kaci took the knife out of Audra's possession, Audra smashed a wine bottle and went after her with the broken shard. Audra later caught Kaci and pressed her head down on the bottom part of the aforementioned bottle, which killed Kaci, but not before Kaci punctured Audra with a bottle opener.

A wounded Audra went after Daphne and Toby, who managed to escape the house. After taking down Audra, Daphne placed Toby inside the car and went to get his insulin before Karen (Toby's mother) called her. As Daphne asked for Karen to call the police, Audra rose up and later removed her hood before confronting Daphne, officially revealing her true identity as Audra Monrose, Mason's mother. Following her reveal, the evil Audra lashed out at Daphne for (in her mind) letting Mason die, and also revealed that she killed Claire after learning that she was sleeping with her husband and how she'd attempted to poison him in revenge for the affair. The villainess continued her attempt to kill Daphne, while claiming that she would do anything for Mason. The women's brawl saw Daphne toss Audra into the pool, and later striking Audra with a chair when she attempted to lunge at Daphne.

Daphne went back to Toby, who warned her about Audra resurfacing. Audra attacked Daphne and clutched her throat in an attempt to strangle her, but at that moment, Daphne took the needle containing Toby's medication and jammed it into Audra's head, killing her instantly. 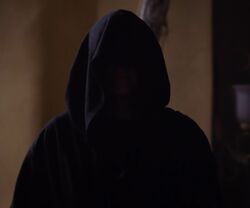 Audra in her villainous disguise 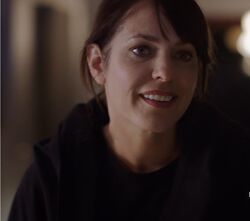 Audra after being killed by Daphne
Add a photo to this gallery
Retrieved from "https://femalevillains.fandom.com/wiki/User_blog:CEDJunior/Audra_Simonetti_(Babysitter%27s_Nightmare)?oldid=165221"
Community content is available under CC-BY-SA unless otherwise noted.