The Female Villains Wiki
Register
Don't have an account?
Sign In
Advertisement
in: Blog posts, 2010s, Attempted Murder,
and 24 more

As shown in the film's opening, Andrea Turner and Isabelle Wagner (the latter being the film's main protagonist) were rivals for the title of homecoming queen 20 years prior to the events. When Isabelle and her then-boyfriend (now husband) Rob Taylor were crowned queen and king, Andrea went into a rage and accused Isabelle of rigging the vote. She angrily confronted Isabelle with her delusions, while also wearing a dahlia in her hair, knowing that Rob was deathly allergic.

The confrontation became physical, ending with Isabelle shoving Andrea off the stage before saving Rob. The fall injured Andrea, and the impact caused her to become barren.

In the 20 years that passed, Andrea married a man named Christopher Sanders, though the marriage was an unhappy one due to Andrea's inability to have children. After tossing away an invitation to her high school's 20 year reunion, Andrea walked up to Christopher and watched as he was exiting their pool, but she would later be on the receiving end of devastating news:  Christopher wanted a divorce. As Andrea figured, it was due to them being childless, and her suggestion to adopt was turned down, as he wanted to be a biological father. Christopher confirmed Andrea's suspicions that he was leaving her for another woman, Molly Sanders, and once his back was turned, Andrea took possession of a shell figurine and blugeoned her husband to death in a fit of intense anger. After killing Christopher, Andrea took out the invitation and then opened her high school yearbook and lashed out at an old photo of Isabelle. She still blamed Isabelle for ruining her life (in her mind), and she decided to appear at the reunion as part of her twisted and vengeful plan.

Andrea had written a checklist that detailed every part of her plan, and attending the reunion was first on her deranged list. She acted friendly to Isabelle and made a charming impression on Sierra (Isabelle's daughter), and her genial persona continued as part of her the next step of her plan:  becoming Isabelle's assistant at the flower shop. Knowing that current assistant Jasmine was an obstacle, Andrea got her out of the way by purchasing a bouquet of flowers and later luring Jasmine out of the shop, allowing the villainess to tase and later kill Jasmine. She had also planted a bug in the shop, and she made a call to Isabelle as a woman named Jamie, demanding an order of 10 dozen roses. Jasmine's death allowed Andrea to become Isabelle's assistant, and as for her as Jamie, she colluded with a young man named Jack in her ruse--sending him to pick up the order.

All the while, Andrea's charm works on Sierra, as she confided in her regarding her essay and her plans for the homecoming dance, mainly asking out star QB Cody Walker. Andrea's deceptions began to catch up to her, as Isabelle had encountered Molly and told her about Christopher, which contradicted Andrea's claim that she was married to a man named Jeffrey and that she left him because he didn't want children. After learning the truth, Isabelle confronted Andrea, who admitted most of the truth, that Christopher was her husband and that he had passed on, while also revealing that she became barren after the events of their prom 20 years prior. However, Andrea falsely stated that Molly killed Christopher due to her obsession with him, and to make sure that Molly wouldn't plague her again, the evil Andrea went to Molly's home and killed her, setting up her death as a suicide by hanging. She also sabotaged Isabelle's big order for the Mayor's Ball, tampering with the thermostat inside the van, resulting in the flowers for the ball all dying.

After much reluctance, Isabelle decided to fire Andrea, who later went on to the final and main parts of her plan:  killing Rob and Sierra. Rob was her first target, as she drove up to Rob while posing as a chauffeur, and later placed him in the back of a limousine--which was riddled with dahlias. To make matters worse, the demented Andrea had locked the doors and prevented Rob from escaping, and it was there that she revealed her identity to Rob. Andrea placed Rob inside the shop, and in the film's climax, Isabelle arrived at the shop and found Rob, after learning about Jasmine and Molly's deaths. She was encountered by Andrea, who waved Rob's epi-pen to Isabelle before tasing her twice. The villainess later went to the dance, where Sierra and Cody were crowned queen and king (thanks to Andrea having Jack rig the voting).

Isabelle pulled the fire alarm to get the kids out, and it was at that moment that Andrea went after Sierra with intent on killing her, kicking Cody's already injured knee when he tried to intervene. After Isabelle confronted Andrea, the villainess latter accused the former of ruining her life, while voicing her long belief that Isabelle rigged the voting 20 years ago. She stated that her plan to kill Rob and Sierra was to take away everyone who Isabelle loved, just as Isabelle did to her when she took away her ability to have children. Andrea's attempt was thwarted when Isabelle shoved her off the stage, just as she did two decades prior.

Andrea ended up arrested for the murders of her husband, Jasmine, and Molly, as well as the attempt to kill Rob and Sierra. The film's final scenes saw Andrea in prison and being interrogated by one of the guards, as Andrea had been hiding metal objects in her cell. The guard took out what appeared to be a weapon, while asking Andrea if she was making a weapon with the objects. In actuality, the makeshift object was revealed to be a crown, which Andrea made and later placed on her head, while calling herself the "Queen of Cell Block 9." The guard ordered Andrea to take off her "crown," with the delusional and deranged villainess acquiescing before killing him with the crown's sharp edges at the very end of the film. 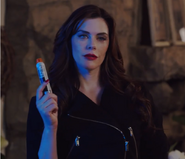