Alexa Pearson is the wife of Roger Pearson, and after they became husband and wife, the couple began producing child pornography, with their movies being part of a series of films labeled, "Just Turned Legal." Despite the title, none of their featured "stars" were of legal age, and the couple was charged and arrested for their crimes. Roger went to prison, but Alexa received parole due to losing a baby to fetal alcohol syndrome, which triggered her obsession with children. Alexa waited for Roger, and once he was released, the couple continued making child pornography, using the web to take unwanted children and use them in their films.

In the episode, the evil Alexa abducted Nicky Moore, the adopted son of Lisa and Tom Moore, using her and Roger's ruse to do so. Nicky was given up by Lisa, who claimed that she couldn't deal with him anymore, and it was a broker who placed him with the Pearsons (while fully unaware of their scam). As Tom revealed, Nicky suffered from diabetes and required insulin on a daily basis, making the case urgent for SVU. The group found the Pearsons' home, which had (among other things) one of their movies playing--featuring Nicky and two young girls abducted by the couple. Later on, Alexa was spotted at the pharmacy in the same van she and Roger used to abduct Nicky, as she was attempting to get insulin for Nicky. She ran off when SVU caught her, but she was taken down by Amanda Rollins and arrested.

Alexa's interrogation with Benson and Amaro featured the callous villainess claiming that she had done nothing wrong, while also blaming SVU for Nicky's health being in danger; going as far as bargaining with Amaro to let her go so she could get Nicky's insulin. After the loss of her own child was brought up, Alexa revealed the location of the abducted children, but not only were the girls found, a baby was found as well. The villainess stated that Roger took the baby and gave it to her as a gift, but after seeing a photo of Roger (who was supposed to be wheelchair bound) walking, she became enraged and gave his location to SVU. After this, the couple were eventually imprisoned (off-screen) for their various crimes. 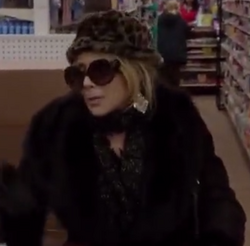 Alexa at the pharmacy
Add a photo to this gallery
Retrieved from "https://femalevillains.fandom.com/wiki/User_blog:CEDJunior/Alexa_Pearson_(Law_%26_Order:_SVU)?oldid=169445"
Community content is available under CC-BY-SA unless otherwise noted.