Ursula is the main villainess from the Disney animation The Little Mermaid. She disguises herself as a woman she calls Vanessa.

Vanessa looks quite a bit like Ariel, but has brown hair instead of red and is much sexier too. Despite Ariel's attractiveness, Vanessa wears dresses that cling, in some cases to the point of being nearly skin-tight, to her curves. This highlight on her curves brings further subtle alterations to bear: Vanessa's breasts are slightly, but impressively, larger than Ariel's and considerably more perky, high on her chest, and tucked into tight dresses that lightly bounce them. Vanessa's waist is smaller than Ariel's which makes her hips, looking as full as Ariel's, actually fuller, all of her dresses accentuate her sexuality, more or less modestly, always clinging to her breasts and hips. She bears more skin than any other clothed character in the film.

Vanessa outwardly imitates Ariel's sweet and kindly nature, but secretly she is actually quite sinister. She puts Prince Eric under a love spell in order to guarantee that he will marry her instead of Ariel, thus causing Ariel to become one of her slaves. She also kicks Eric's sheepdog, Max, in the face after he growls at her. 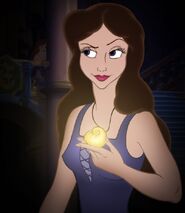 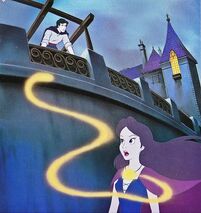 Ursula in disguise as Vanessa 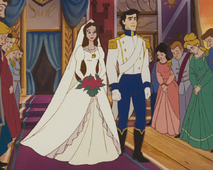 Ursula's true form
Add a photo to this gallery
Retrieved from "https://femalevillains.fandom.com/wiki/Ursula_(The_Little_Mermaid)?oldid=209840"
Community content is available under CC-BY-SA unless otherwise noted.