Ursa (Sarah Douglas) is one of the Kryptonian Villains that takes over the world.  She appears in both the 1978 film "Superman" and the 1984 film, "Superman II".

In "Superman", Ursa is a co-conspirator of General Zod (Terrence Stamp) during his attempt to take control of Krypton.  She hates all men, except Zod.  She is banished to the Phantom Zone along with General Zod and Non (Jack O'Halloran) by Jor-El (Marlon Brando) for attempting to overthrow the planet Krypton's government.  They survived the planet's destruction and were blown off course toward Earth.

In "Superman II", an explosion of a hydrogen bomb launched into space by Superman (Christopher Reeve), hit the Phantom Zone holding Ursa and the others, destroying it and releasing them, who went to Earth's moon. There they killed several US astronauts and Soviet cosmonauts. Upon reaching Earth, they discovered that they had the exact same powers as Superman, and naturally used them for evil, terrorizing the cities and even killing civilians.

She aided General Zod taking over the president's office, but the president (E.G. Marshall) told them that Superman would never kneel before him. Lex Luther (Gene Hackman) joined forces with them, offering to tell them the location of the Fortress of Solitude, but eventually they decided to kill him. Superman came to stop them from terrorizing the city. Their attacks were able to affect each other, but in the end, Superman was outnumbered and lost, retreating to the fortress. Luthor led Zod and his gang to there.

Superman tricked the three Kryptonians with multiple holograms, but when he had him in a headlock, Ursa threatened to tear Lois Lane (Margot Kidder) limb from limb unless Superman released him. Luthor seemingly joined forces with Superman, who then told him to get Zod and his gang into the molecular chamber that would take away the powers of any Kryptonian. Luthor then told Zod about this, and Zod, threatening to kill innocent people otherwise, forced Superman to enter, with Luthor activating the device.

However, Superman, knowing Luthor was going to double cross him, switched the device so that its rays would affect those outside it and not inside; therefore Superman was safe while Zod, Ursa, and Non were stripped of all power. Zod made Superman kneel before him and told him to take his hand and swear eternal loyalty. Superman crushed Zod's hand, picked him up, and threw him into a wall, where he fell into an icy abyss to his death. Likewise, Lois turned around and punched Ursa, sending her to the same fate. (Non tries to fly across a abyss and falls to his doom). Lex Luthor (who hoped to become Dictator of Australia) is literally picked up by Superman and goes right back to prison. 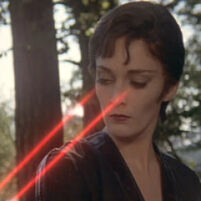 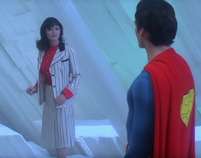 and the triumphant Lois! 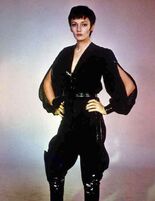 Add a photo to this gallery
VideosEdit

Retrieved from "https://femalevillains.fandom.com/wiki/Ursa_(Superman_II)?oldid=194808"
Community content is available under CC-BY-SA unless otherwise noted.